Whoo! We got some Fangirlin’ to do today! :D

Madoka Magica: Okay, so I’m watching this series episode by episode over on Crunchy Roll just to check it out after all the hype and fandom I see. Up to Episode 9, I thought it was a creative, dark take on Magical Girls. The twists were good, the animation was fantastic, and I was enjoying it–but nothing that I was too crazy over. Or rather, I didn’t mind waiting a few days after they released the episode to watch it, I should say. It was good, but nothing I was totally in love with.

And then Episode 10 happened, “I Won’t Rely On Anyone.”

This is approximately 21:00 minutes into the episode. I literally shouted, "Yes! You are awesome and I love you!"

This. Was. Amazing. I don’t want to spoil it–but this is how you do “Homura’s Power” right.  This is the episode that validated & made the rest of the series amazing, made me fall in love with Homura, her relationship with Madoka in its entirety, and has me itching for the next few episodes. Love it. So good.

Recorder and Randsell: I’d just like to stick in here that this show is still freakishly adorable and the episodes should be longer.

Supergirl #8: New Artist! It threw me a little, but it wasn’t bad. Just a different style, but it all still looked good. Actually liking the Silver Banshee storyline. New girl Siobahn is fun and her & Kara were great interacting off each other. Seriously, people wanting awesome females in comics should be reading this. >.> It’s just been one great girl after another.

My only complaint is the Silver Banshee costume is…ew. *Shiver* 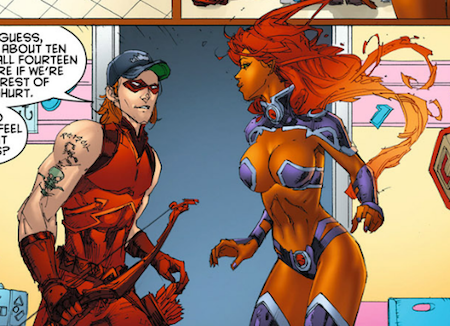 Red Hood and the Outlaws #8: This….has easily become my favorite issue of the series. 10/10 no question. It had everything.

It was fun, funny (hilarious, really), adorable, sweet, heartwarming, and full of action all packed together in a smooth narrative. I were to list my ‘favorite parts’ I’d pretty much quote the entire thing, but, for highlights’ sake: 1) I now ship Roy and Kori 100% and if that happens I will squeal in fangirl joy. 2) The Tim & Jason moment was amazing and well, perfect. Sooo good. I might actually hunt this one down in print. <3

Nightwing #8: I dropped Nightwing back at issue #3, but I was informed this was a must have as far as the Owl’s arc was concerned. So I went ahead and snatched it…and I’m glad I did. Definitely an improvement from what I was reading earlier & the cliffhanger was amazing. Can’t wait for #9. :D

Batman #8: This would be the one everyone’s talking about and waiting for. And they are right to do so:

“…I now know that you can spend your whole life learning Gotham from deep inside, and still know nothing about it at all.” -Bruce Wayne, Batman #8: Attack on Wayne Manor

Jaw dropping issue. If I were to paste the best screens, it’d be the entire book. Amazing writing, amazing artwork & top form cover to cover. I don’t know who was better, Alfred or Bruce. You’ve read the summaries elsewhere, so I’ll just say go read it as a second opinion (or probably a third or forth or fifth since I’m behind. XD) I had reservations when the Court of Owls thing first started, but this is an amazing cross-issue arc and I recommend it full force. <3

And, since that’s all the drama and action you need, we’ll just end with this one: 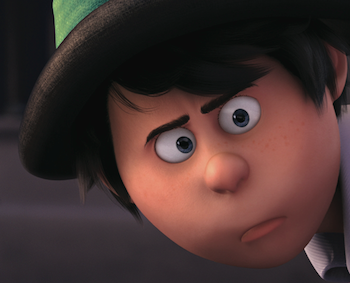 The Lorax:  Loved this movie. Love the soundtrack more though: Ed Helms can sing and be hilarious at the same time. It’s an amazing combination.

I didn’t think I’d like this movie, mostly because movies that push the ‘Go Green!’ thing tend to bug me, but hey! I liked Captain Planet, right?

Anyway, the green-thing wasn’t nearly as in your face as I thought it might be, and giving The Once-ler some character and motivation worked very, very well. He also got the best musical number in the movie–“How Bad Can I Be” never really leaves your head. And Once-ler is amazing…because he’s adorable and I loved him. So much. I drew so much fanart of him and I really, really want the DVD to come out already so I can take screens of him in his suit and stare at them all day.

*cough* But aside from being obsessed with The Once-ler, it was funny and Ted’s Mother made me laugh more than Betty White as Grandma Norma.

And the sounds cut from the movie and/or the original demos are amazing. Love the soundtrack. Buy it. :D

Okay. So I actually have something to fangirl about (The regular updating this when I bought comics thing kinda stopped when…I stopped buying comics regularly. Or rather, I got an account at Jmanga, so my budget is between two awesome comic services instead of just one…so I’m counting my pennies, so to speak. XD *thumbs up*)

So let’s start with the quick things before I dissolve into squee-crazy land: 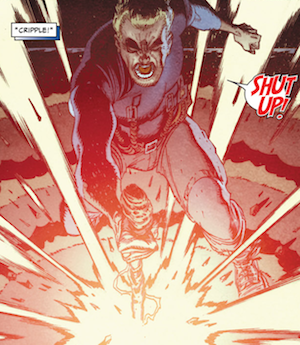 I think I just have a thing for guys named "Donald" <3 Either way, he's awesome.

Got this on a Comixology .99 cent sale (Oh how I love those things–I’m sorry Marvel, but $3.99 is too much for a digital comic.) & I’ve only read the first issue out of the 5, but I like it so far. It’s a re-telling of the Donald Blake version of Thor finding the staff/hammer & even includes a copy of the original version.

Wasn’t too crazy about the art style–but I LOVE the Donald Blake secret identity when it comes to Thor. The intelligent doctor with a walking stick, who turns into Thy/Thou Thor? Win all around. Plus, it looks like Loki is the main villain which should always happen. Thor and Loki forever.

If you haven’t figured it out by now–I really, really like Thor. He’s 90% of the reason I read anything by Marvel. (The other 10% involves the movies, Iron Man & Captain America.)

Nothing in particular, but lately I just can’t seem to get enough of Spain & Romano. <3 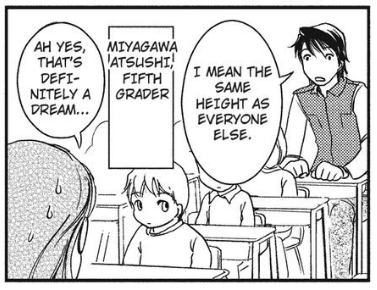 He is way too cute for his own good.

I like this series/manga a little too much to be healthy. I don’t know what it is about a ten year old who looks twenty and a his older sister who looks ten that’s so hilarious/heartwarming, but it is. o_o And his crush on his little classmate is so adorable. XD

My only complaint is that it’s so short. I don’t mind the 4-panel strips/manga part so much, but the 3 minute anime episodes aren’t enough. The sketch style comedy is fine, but gimmie more. It’s Hetalia all over again with it’s 5 minute episodes–only two minutes shorter. At least now with the Hetalia DVDs I can watch them all in a row. Still–at least Recorder & Randsell got a second season green lit. :D

Heh. I’m watching it as Crunchyroll gives it to me, so I’m only on episode 6 but yeah. Madoka Magica. I can’t tell if this series is living up to the hype or what. But it’s good. XD

I miss Mami though. *twitches* Why do I even bother liking characters? They always, always end up leaving me. XD

And Kyuubei is evil. EVIL.

Houji Sadojima is a character from Rurouni Kenshin–specifically he’s one of the followers of Shishio, and hangs out on equal grounds with Yumi.

Houji Sadojima was my hands down favorite character in Kenshin and him, Shishio and Yumi was my power trio for the series. I loved them. I actually cosplayed once as Shishio and begged & pleaded for my good friend to cosplay as my Houji. (She was awesome by the way–I don’t care what anyone says: her costume was dead on! *hugs*)

I can not physically picture Shishio without Houji and Yumi right behind him. It’s not possible.

Needless to say, when I caught that “The Secret Life of Characters: 33” in Volume 13 that says Houji was one of the author’s favorite characters–glee. And that wasn’t even the best part – during the ending of the Kyoto Arc where they all meet up in Hell? Biggest “Awwwww~~~” Cooing moment in Kenshin. I squealed like the little fangirl I was.

My only concession was that I preferred him breaking his own fingers in the anime instead of ripping his nails off in the manga. That was a tad creepy. XD

What’s the point of all this? THIS NEWS POST. Did you see it? Here it is, right here:

Houji. Shishio. Yumi. They must come in a set.

A Houji figurine exists. The character most people don’t remember, or refer to as “That whiny, creepy guy?” He has a figure. Out of all the characters in that show, they actually kept this little trio in tact. <3 <3 <3

…I also want that new Shishio figurine, but that’s another story.