So, it’s been a while since I showed off some toys…and since someone caught me buying Transformers figures to day and gave me a funny look because I’m twenty-seven…I figured this was a good time to go “YES, I COLLECT TOYS, WORLD, LEAVE ME ALONE” in an immature and blog-worthy fashion. :D As you can tell by the all-caps. I’m very hyper today and you’ll probably notice… 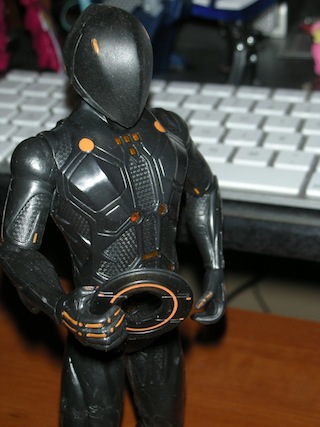 Well, don’t get me wrong, Tron was always a pretty rad guy and he always had a set of moves–but let’s face it, in Legacy he took a level in badass.

You may have noticed I have a preference for Rinzler over Tron. *cough* It’s probably the helmet. Or the purring. Or the bad boy thing. Or the fanfiction potential between him and S–

Figure. This is a figure of Rinzler and I found it on sale. Isn’t he just the cutest? :D

(Phew. No one caught my slip. Ha ha ha. And no one will ever know because I’m being so sneaky and…I’m typing out loud aren’t I?)

Hey look! Hexadecimal thinks he’s a stud too! *throws distraction at everyone* 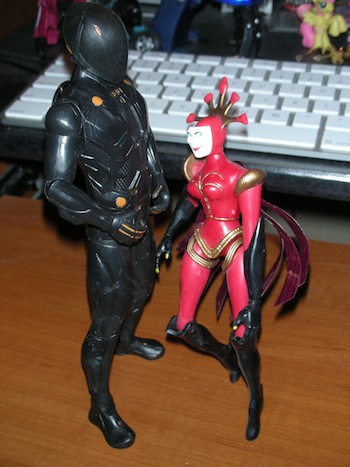 She thinks he's a stud, too. And hey! They could actually get together!

Okay. Enough of that. The rest of these are from TRANSFORMERS.

I got a tiny Starscream. He’s the perfect size ratio to the Skyfire (Jetfire to those who jus tread the toy boxes and didn’t pay attention to the G1 show) figure I already had. Being a huge fan of the uh, Starscream & Skyfire bromance…the following was unavoidable: 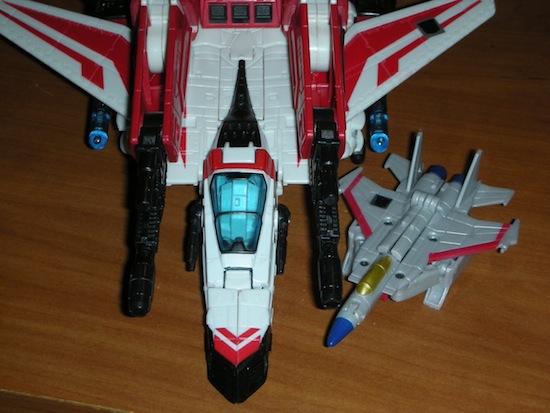 You can’t blame Starscream for wanting his buddy back. Skyfire might be the only person who’s ever really cared about him. 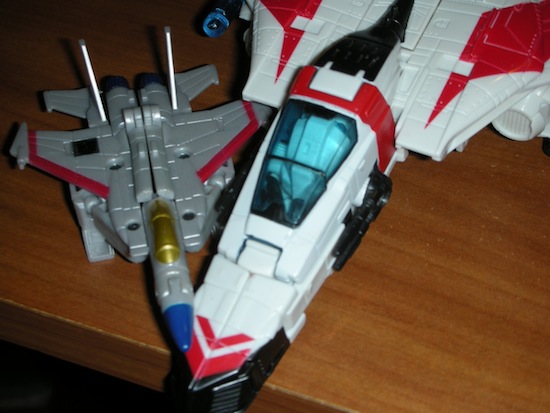 And Starscream is stubborn. Skyfire shall cave! 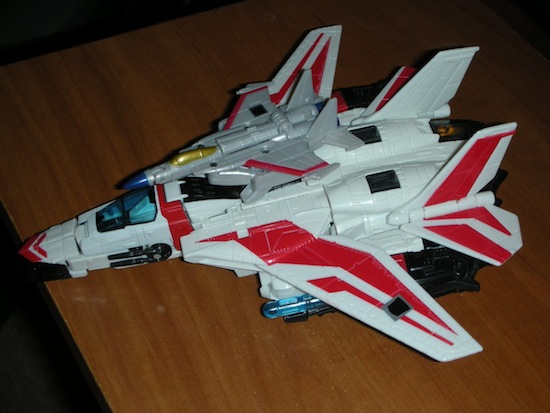 Jet Snuggles have commenced. Transformers is the only fandom where jets can snuggle. *shoves them together and giggles like a five year old who discovered pixy sticks* 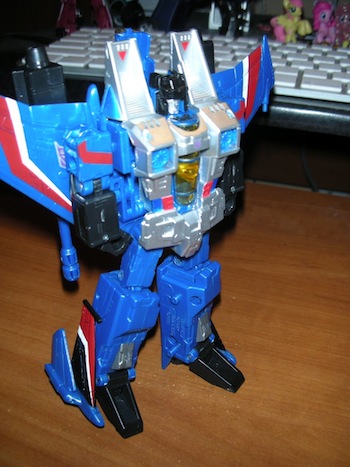 Thundercraker: He's Mr. Serious and Thinks Too Much

(Would you believe I found that at Khols of all places?)

Hmm. Another Decepticon good at getting all your attention? Well Soundwave of Course! 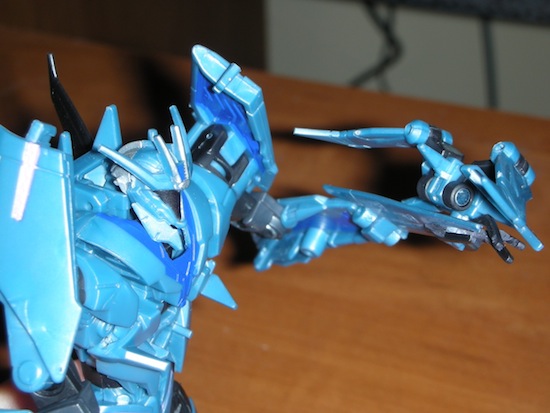 His Prime!Version is probably my favorite version of the character. He’s got an amazing amount of personality for a guy who never says anything. And the toy confirms the little thing that pops off his chest is Laserbeak. Something I was never quite sure of, but never bothered to look up officially. 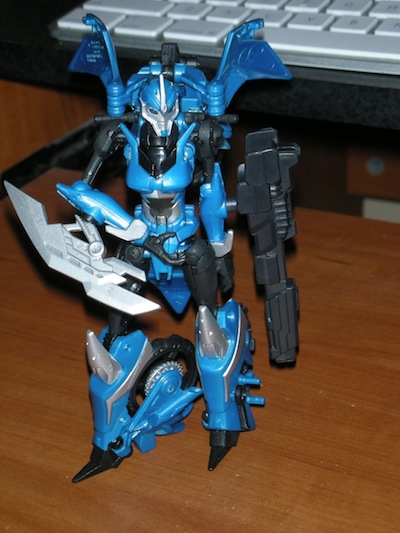 Look! It’s Arcee! And I didn’t have to resort to Ebay to get her! XD I literally walked by the shelf and went “That can’t possibly be what I think it is.” *yoinks toy off rack* “…This is Arcee.” *scours shelf for another one* “YES.”

Now all I need is an Arachnid figure to come out. For…reasons. That won’t involve a camera. *cough*

I still wish they just would have kept her name as Chromia. Because come on. Prime!Arcee is Chromia. She’s even the right color! XD 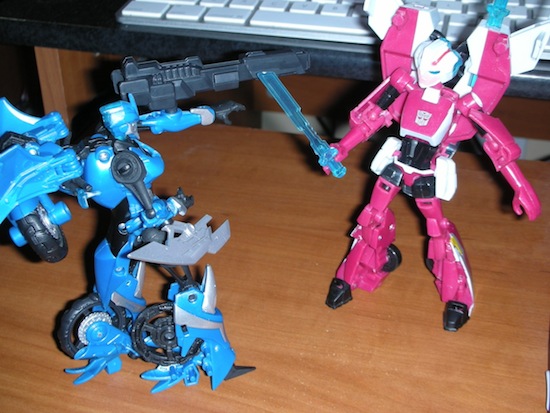 Chromia vs Arcee! Because if it was Arcee vs Arcee they'd both be pink.

I’m starting to think I shouldn’t be allowed to have a camera near action figures. Just be happy I’ve never gotten into the photo-comics game. Or else you’d get a storyline that makes this possible: 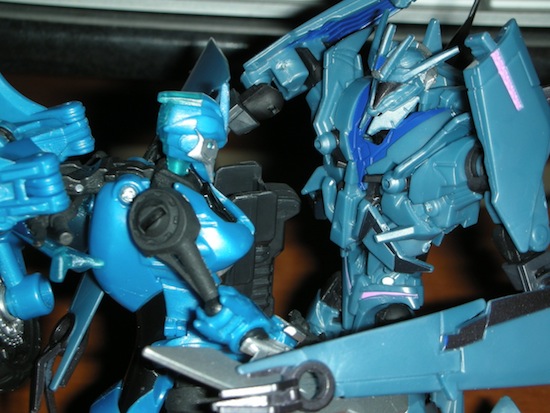 He's such a good listener.

*runs away cackling madly into the night*

Today I saw Transformers: Revenge of the Fallen.

Now, I’d like to set this up for you all – before the movie, I (being the spoiler lover that I am) read up on the plot summary and was instantly excited because I was promised (finally) some talking scenes with both Megatron and Starscream. Plus, Frank Welker is playing Soundwave and Devastator. How could that possibly go wrong?

However, after that I figured I’d read some reviews to get an idea of what I was in for and see how it was being recieved after it’s opening day.

Almost every single review declared it a horrible travesty. It was attacked for being plotless, boring, full of horrible acting and dialogue, offensive, and without any sort of character development. They hated this film. Review after review declaring it a piece of trash.

I laughed after looking at their complaints and had only one thought: They have never seen the cartoon.

All I could think while watching was – this is classic Transformers. At it’s best. Now, it was not without its faults – the Autobots could have had a little more screen time and one or two sex jokes could have been cut, but more or less it was full of everything that made the Transformers cartoon so great.

In the reviews, they mentioned that this film barely had a plot and it was hard to follow what was going on. I’m not quite sure where they got this – it was fairly straight forward. The Fallen came to Earth millions thousands of years ago to harvest the sun for Energon and was attacked by his brothers for trying to destroy a planet with life on it. Present day, he’s back for revenge and to try again and create energon. The side plot? Get the Matrix (the key to turning on the big machine that makes energon) before the Fallen does.

This is standard Transformers. Season One of the G1 Cartoon was entirely about Megatron trying to collect energon from various sources on Earth from mining gems, to raiding oil rigs or using electricity. All things considered – using a machine to capture the sun’s energy almost makes more sense than what the cartoon did with pouring oil into a clear box.

I’m not sure what else to say. I guess if you’re not familiar with the original cartoon you may not realize that the hunt for energon is a classic plotline in this franchise.

I will admit though, there is something to be said for the lack of Transformers speaking roles. There is a bit too much of humans and not enough Autobots. But, compared to the first film they doubled their screen time so I’m not complaining too much.

Though, I have to clarify that it was the ‘Autobots’ who didn’t get much screentime (Aside from the twins, Skids and Mudflap…they got a little too much. They weren’t as awful as people describe them, but I would have preferred more Bumblebee.) – because the Decepticons got a lot.

Megatron and Starscream had three long scenes together. I nearly wept with joy seeing Megatron strangle Starscream. This is Transformers. This is what the first movie was missing – the Decepticons talking and bickering and Starscream being the groveling suck-up he is. I may be a tad biased considering Starscream has always been my favorite character, but the two of them more than made up for one too many scenes with the twins.

Plus, Simmons returned. I liked him in the first film, and I like seeing him on the good guys side in the second.

The one character I was hesitant about was Jetfire (Also known as Skyfire in G1) because he was being portrayed as a senile old man. Thankfully, I didn’t have to worry. Jetfire was great. He was crazy and lovable and declared his father to be THE wheel. His greatest moment? Hearing there was a Prime on Earth. He got this puppy dog happy look on his face that was just too endearing.

Oh, and Soundwave as a satellite? Much cooler than I anticpated. I blame it all on Frank Welker and his sheer awesomeness.

As for the humans – seriously. What series didn’t have annoying kids that no one liked who had too much screen time? >.>

Transformers is built on corny, pun-filled dialogue. The fact that they railed on such things as Simmons going “Not on my watch!” makes me shake my head. Again, going back to the source – it’s always been a mix of the awful and the amazing. Optimus is the only person who can get away with saying both  “Fate rarely calls upon us at a moment of our choosing”  and “Let’s roll!”

Awful dialogue blended with moving inspirational statements is the blood of this series. I won’t hear a word against it.

I loved this film. The action was amazing – Megatron and Starscream had three amazing scenes together – Optimus kicked ass. There were so many things to squeal about.

And Ravage – did I mention Ravage? That cat was made of win. Made. of. Win.

I wish I could remember where it was, but in one review the author commented he couldn’t understand why such advanced robots with such impressive technology were hitting each other with their fists.

Because they’re Transformers. They’re not mindless fighting machines, they’re people. And most people will tell you there’s a difference between the satisfaction of decking someone with your flesh and blood fist and just shooting them. Optimus knows this well and he is one kick-ass brawler. Let’s face it – Giant Robots beating the crap out of each other with their bare hands rules.

And we all know that Megatron beating on Starscream just wouldn’t be the same if he shot him instead of slapping him upside the head.

Let’s see…I think that’s it. Revenge of the Fallen is a movie that is most appreciated by those who loved the cartoons, the comics and everything that makes Transformers Transformers.

I can’t wait for the third one.