Was missing that personalized touch to my theme~ So, I went back to the basic bundled WordPress TwentyEleven Theme & customized/tweaked it slightly.

Whoo! It’s also got some neat new organization stuff on the side I might try out (like separate post types for Galleries/Images/Quotes and stuff) that resemble Tumbler. We’ll see how that goes. XD

The theme features some original artwork of mine of Benjamin & Éclat from WaM. :)

Another year, another Katsucon~

Your run down is now:

Friday: Overslept. By a lot. Ended up making a mad dash out the door and not arriving to the convention until 3:30PM or so. Put my stuff in the room & then registered. Spent the rest of the day waiting for my brother to arrive & wandered around the Artist’s Alley/Dealer’s room for a bit.

Speaking – Friday I said Hi to Erin from Tamuran – and he gave me the original artwork for his WaM Pair-a-Thon entry. Squee. Squee to the max. XD (The two post-cards were from KGJ. :D) 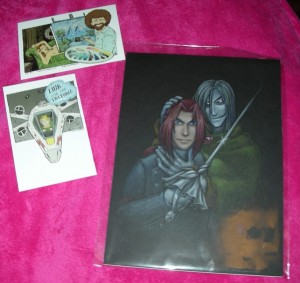 Prints from KGJ & Fanart from Erin

Oh, and Dinner was a Pot Bellies. Yum.

Saturday: Awoke bright and early (for me) around 8AM And headed off to places. My Bro and I went to the Hetalia International Relations panel, followed by the dealer’s room and…lunch in the room. (Our Room brought a LOT of food. We basically fed ourselves for three days and it was awesome. XD Name it and we probably had it – from Pocky to Summer Sausage and a certain roomie brought home made truffles. Yum.)

And then my Brother & I were going to go to an Evangelion panel, but we changed our mind and headed over to watch Summer Wars instead.

Just go buy it. It was a ridiculously good movie and I was choking up about to cry it was so good. And the dub was fantastic – Funimation pulled out all the stops. My brother and I bought the movie the second it was over and we could get to the Dealer’s room. I’d have a picture but my brother hijacked the DVD.

Instead – pics of the rest of my Katsucon Haul since I did all my shopping on Saturday. xD 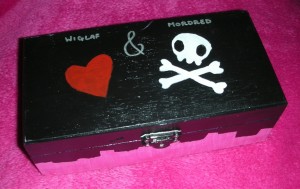 Okay, so the above box isnt’ something I bought. XD Miss Eva, a fan from WaM, found me in the Dealer’s room and gifted me with this hand-painted box. So sweet. Thank-you Miss Eva!!! :D 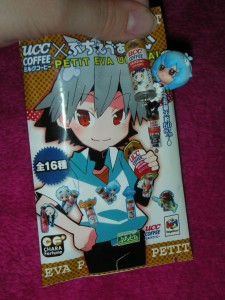 I won’t lie. I might be hunting down the rest of these charms on Ebay. They are ridiculously cute and I’m almost sad I only bought one. I seriously want the entire set of them. They’re tiny. They feature drink bottles/cans AND they somehow made all those angels preciously adorable. *pets her one keychain* 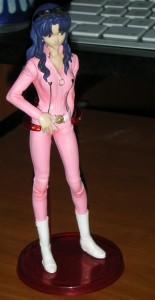 I think I can finally admit to myself that I have a super girl!crush on Misato Katsuragi from Evangelion. I have three figurines of her and that is the most figures I have of any one animated character. And worst? There are others I still want – this was just the one I bought at the con (I’m trying to limit my figure purchases. XD)

But I love her so. Fear my Misato collection: 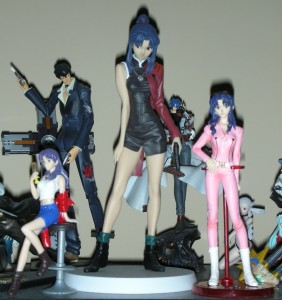 Yeah. She’s hot. I know it. And two should look familiar because they’ve been featured on this blog before. XD In fact, I bought the large on at the last Katsucon. XD 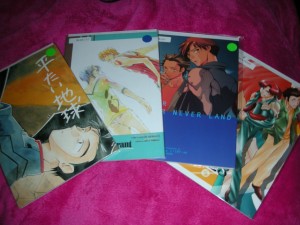 Last but not least – I splurged on a few doujinshi. Can you believe I found a doujinshi that features Touji from Evangelion that’s well drawn? I know. Awesome find. An Ichigo/Ishida doujinshi that I’d read before and the last two are from S-CRY-D – I don’t see doujinshi from that series often so I figured I should grab them while I saw them. Yay!

Last but not least, aside from my brother purchasing the Ensign Sue Must Die printed book, only two Webcomic Artists actually said hello when we stopped by their booth (you know, aside from Erin and Megami – who knew us XD) So I figured I’d post them here so I actually remember to go check out their strips when I get free time.

If you read them before me, let me know how they are. XD

Sunday: Sunday can be summed up by one word: EVANGELION.

My brother and I woke up at 6:30 AM to pack all of our things and get them out to our car in order to be able to make the 8AM showing of Evangelion: 2.22 You Can (NOT) Advance.

Worth it. Sooooo worth it. *noms on DVD not coming out until the end of March*

We left immediately afterwards to keep ourselves from spending money. XD

And then I read Batman Comics until I worked up the nerve to make this post.