I’m sure most people involved in the Webcomic community have heard of ComicPress in one form or another. It’s become somewhat of an ‘industry standard’ for those using WordPress or WP as a platform for displaying their comic. So, either you’ve heard of it looking for the best method to manage your own comic, or you’ve seen others using this theme. Recently, there’s been a hoop-la of activity concerning it’s recent move to pay via twitter, forums & personal blogs of the creators.  This ‘ComicPress Premium’ or CPP1

So far I’ve been keeping my mouth shut on the topic, but it’s been building up enough that I need to vent somewhere on the subject and let you know my thoughts on the matter: The Pay Schema for ComicPress is most likely going to suffer failure.

Before I get too deeply into this topic, I feel it’s important to set up a little background of my own personal history with ComicPress. When I first decided to host my webcomic on my server2 I browsed around looking for the best method. I knew I wanted it to be automated due to the size of the comic and the complexity of managing all of those pages. As I looked around, the best choice I could find at the time was indeed ComicPress – at the time Version 2.5.

It took a little bit of time, but I did have my site up and running fairly quickly. Didn’t look great, but it didn’t look awful either. It worked – which is what mattered. Eventually though, I wanted to customize the site a bit more and was having trouble – so I asked Mike to give me a hand say, replacing the navigation with buttons3 and he helped out quite a bit. Eventually though, Mike looked farther into the code and realized – it was a mess. They had plugin functions built into the theme itself and the site was not set up for friendly styling. A few aggravated tries to modify later and well – let’s just say Webcomic was born and leave it at that.

However, before anyone starts arguing that I was messing with an older version – part of working on Webcomic & Inkblot means keeping up with competition and seeing what they’re up to as they release new things.4 So I have run, installed and messed around with the newer versions of ComicPress and to be frank? I’m not that impressed. But that’s a personal preference and at the end of the day –

None of this matters.

The Problem With Charging

The main reason the ComicPress for Pay model will ultimately hurt the Theme/Developers at the end of the day is it’s base CMS – ComicPress works with WordPress.

WordPress is a traditionally free CMS system that runs on the Free Model. The core CMS? Free. Themes? Free. Plug-Ins? Free. Support and Help? Free. The majority of WP users and developers do not expect to charge or pay for things related to the system and software. It’s Freeware on a GNU license.

If someone’s making money off of WordPress – it’s because of Donations. People donate to plugins and authors that they feel have gone out of their way to help the user or have provided a service they love. In fact – it’s rather similar to the webcomic community that does not charge for people to read their materials, but instead puts a happy little donate button on the sidebar.

Charging people to install CPP is going to result in sticker shock, outrage and people trying to justify the cost – and it worsens when you stop and realize that as of right now there is nothing that CPP is offering that you can’t get elsewhere for free. The fact the original number slapped on the product was $79.99 didn’t help matters either – not only where they charging for something they had come to know as freeware, but it was a steep price for what basically came to an install and troubleshooting support.5 It was mentioned that the “Designer” installing the software would set the price – but even then, that’s a marketing scam in itself. You tell people it costs $80 so when the person you approved to sell the product lists it as $40 – BAM! You think – what a great deal!

Of course though, there will always be defenders to things of this nature – here are a couple of the more popular defenses I’ve heard and my personal responses:

The creators worked hard on ComicPress and use their time to help people out! Why shouldn’t they make money off it?

It’s true, I do not doubt that the people making CPP have worked hard on their product and probably deserve a little compensation. But then again – so do the people who created the WordPress core. Or all those free Plug-ins. Or any of the thousands of themes in the WP Theme directory – some of which are quite literally professional quality. Do they deserve a little capital to pay for their services? Probably. To compensate for all the endless hours they spend trouble shooting and helping people out? Definitely.

Are they charging for any of it? No.

Again, as referenced above – WP is freeware. If you like the theme you’re using – donate. No one is forcing you to give them money but it’d be nice if you did. The point is the option is left up to the user to donate as they see fit. In general, no one is expecting or charging money for these services.

What about all those people charging for their themes? People have Pay Themes all the time and they make money!

Pay Themes on their own are a bit of tricky business – I personally can not see any plausible reason to pay for a theme. If you can’t find a theme you like in the Free WP theme directory, than you’re either looking for someone to personally design a unique site catered to your needs6 or might want to consider taking a framework theme and designing it yourself.

If Pay Themes make money selling their themes? I guess all the power to them – but this is assuming that the people buying are well aware of the free themes available -most of which are of equal quality or better than quite a few themes out for pay. Sadly, in this market anyone can slap a pricetag on a theme they created and call it ‘Pay’ but it may not actually stand up to the price it’s advertising. One of the very few instances where “You get what you pay for” has very little meaning.

Word of advice for this particular situation? Check the free stuff first. You’d be surprised what you find.

You don’t even use ComicPress so your arguments are invalid! You’re part of the competition so of course you’re trying to tear us down! You have a significant bias!

Because I no longer use a product or service does not make my opinions of the service invalid. I have used it [ComicPress, not CPP – despite what they say I can’t see them being THAT different], seen it and came to the same conclusions I had the first time around. Constructive criticism of rival software is to be expected. Analyzing a product that is in high regard and used in a community that I am a part of is to be expected. Ironically, condemning the pay model is almost trying to help ComicPress. Options are what make WP such a great platform. I don’t want CP to drop off the face of the internet and leave no competition.

I think introducing CPP as a pay model is the rough equivalent of ComicPress shooting itself in the foot and I deeply hope they’ve realized this by now.

And of course – there are my own questions concerning the theme and the pay model. There is a good chance these questions could be answered when CPP is released, but right now information surrounding CPP is vague and they stand true. Such as:

Can I get CPP by itself without a designer getting involved? How much will that cost?

Will updates to CPP be free? Or will they require another installation cost?

What features are included in CPP? Are they truly unique to this plugin or can they be substituted by the thousands of other plugins out there?

Is it easy to modify? Does it have cleaner code than CP Legacy?

Is it possible to preview the theme and its code for myself before I lay down a $20/$40/$80 price tag? If it fails to meet my standards of quality can I get a refund?

What qualifications does one need to meet to sell and distribute the theme as a ‘Designer’ – is it only friends and people who worked on the theme or can any site be a distribution point if they meet a certain set of design standards?

The list could go on and on, but I’m sure you all can see where I’m coming from. There’s been a lot of questions raised – but not too many answered as of yet.

WordPress is a free content management system that is run by a community of developers and authors who7 offer their services and products on a donation-only basis. ComicPress is a Theme/Plugin combination that runs on WordPress, therefore – charging for it with a steep price tag is most likely going to turn away users and have them seek out other alternatives first.

Plus? Webcomic authors are cheap. I’d put a bet on it but I don’t think I want to spare the quarter.

Well, haven’t posted in a while, and I came across a lovely offer over at a favorite webcomic where if you drop a link/name/plug you’ll get an exclusive three-page comic.

And considering I’ve been a huge fan of Goodbye Chains since I discovered the comic oh, around when page 115 (Lucky me! I got in just in time for a new arc. Tee hee) was posted, there’s no way I could pass up such a great chance to see Banquo and Colin locked in a cabin.

So, I figured I’d give you a quick idea of why I’ve enjoyed and continue to enjoy this series.

For starters? It’s memorable. Pages 1&2 had me hooked. Banquo meeting Colin was simple, well drawn and it worked. These two pages set up their entire relationship for the rest of the series and while they’ve grown and changed (a plus) it’s still that same sense of humor. 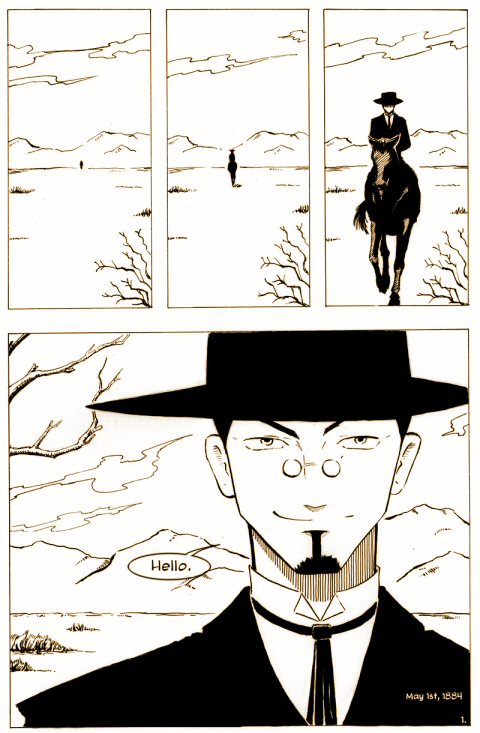 Goodbye Chains is a comic about a bandit named Banquo who befriends a communist named Colin and together they rob banks and learn about life, love and all the rest of that fun stuff running into everyone from Ex-performer thieving cowgirls, to gullible townsfolk.

Though, what I appreciate most – is this comic handles both humerous & serious storylines very well. The transitions between these two genres is fluid and it’s easy to be laughing one moment and then sobering instantly within a single page. I think this happens because the characters are real. Banquo and Colin are easy to connect to and you find yourself caring about their relationship with each other and the people surrounding them.

As far as content goes, Goodbye Chains is rated R because it “May contain fantasy cannablism” (I’ve always loved their rating banner XD). However, while there is definitely mature topics covered (i.e. Sex), it handles it in a very tasteful manner. It handles these topics both humerously and dramatically without being overly graphic or obscene.

So, on a wrap-up note, Goodbye Chains is a wonderful story about two men in the old west (Did I mention the author has posted Historical Notes? :D) And you should go read it.