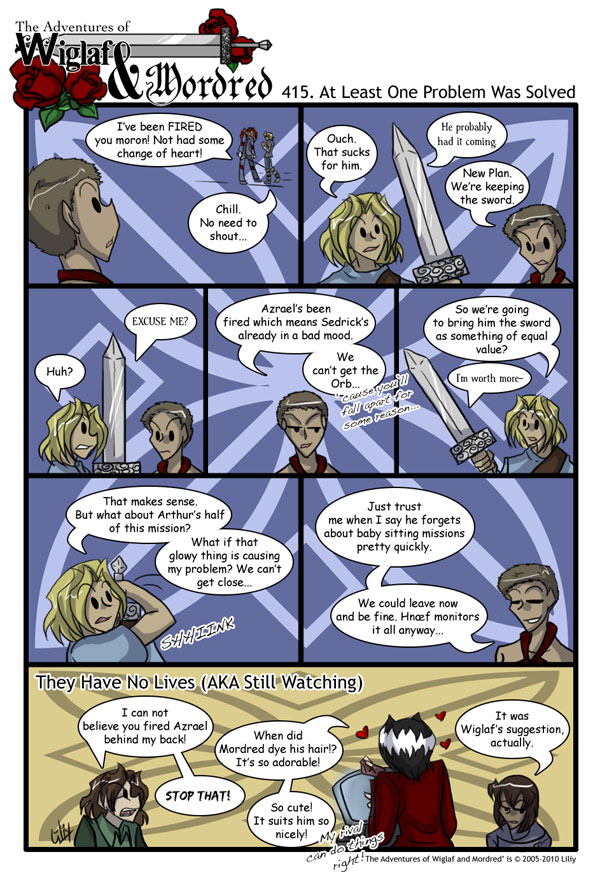 At Least One Problem Was Solved

Hee hee. Poor Camlann. Sheathes are his number one enemy. And he was behaving for once too. XD

Not much is new for me. Watchin’ a new anime called ‘Ghost Hunt’ but it’s so-so. (It’s kinda’ like Tactics, but with more technical stuff going on…and more female characters…). Um. Yeah.

Anyways. This Volume is almost over. I’d say Arc but the next Volume will happen immediately after this one – so for once there’s no time jump in between. XD So it’s more like one arc spread out over two volumes…thing. Look forward to part 2 coming soon is what I mean to say.

And on a random note – I kinda really sort’a want WaM to be at least bilingual. Anyone feel like translating it for free!? :D Just throwin’ it out there. ‘Cause I can’t afford to pay anyone to do it and I’m not good enough to translate it into anything. Or have the time. XD

I can try to work on it in French… I probably won’t get far, though. XD
Oh, Arthur, you and your brother complex…

I can do it in French if you don’t want to. Or I could help you with it. It’s my second language, but I’m pretty good at it.

Ha ha. Oh~ French. I don’t speak that language either. XD But it is pretty~

Well, if you want me to, email me here karutyr at yahoo dot com

I'd translate it to Chinese for you, but I can't type Chinese on my computer :X

i would offer but i cannot write/speak/read another language.

How much do i love arthur? He is so awesome!

I love Arthur. I love Arthur fussing over Mordred. That is the single thing that first drew me to the comic.

on a side note, the anime series Night Head Genesis is rather interesting.

It is. Ended kinda’ sudden though. XD [Night Head Genesis]

WHEW! Just completed my first (of many to come) read through, and I must say WOW. -applause- Can’t think of a single un-awesome thing to say about WAM. Every single comic is pure fantastic. And how dare you be the first webcomic (of the 7 i am up to now) to yank me out of my introverted self and FORCE me to post comments. I just couldn’t resist posting comments on my way up here,too. I followed a link here from catenamanor.com b/c of the character’s names, your art style was so different from what I’ve seen before, and the fact that every comic was amazing kept me reading more. I have lost so much sleep with WAM it is not funny, I even overslept and was late to work today! The laughs are so worth it though. WAM shall be the first comic I check (i’m on every day). I’ll try to do the reader survey soon, and I can’t imagine not posting in the future. Whoah, long comment! Love your name Liliy, love the comic, love you, love everyone here and everything. Oh, and I keep Pin-up IV open in another tab all the time now. :love: :ohhyeahh: OH. MY. GOODNESS. I hope my wife doesn’t see. Love you and see you again!

You have good taste in Pin-ups, Joe. Kudos. :D

Glad you enjoyed yourself & thanks for all the fun comments~

And no getting in trouble with the wife. :P

Shouldn’t be a problem with my wife, I a GOOD boy, and she loves me muches. Just finished the reader survey, and I have one complaint. Your “Rate WAM” scale of 1-10 doesn’t go to eleven. It’s no use even making 10 infinite awesome, it should still go to eleven. Man, now I wanna see This is Spinal Tap again for some reason. :lol:

Hagen’s motives are good, but I have a feeling that Sedrick will probably just be annoyed at having a loudmouth talking sword instead of an object that can nullify magic. Gawain and Hagen had better pray that Sedrick can be appeased. ^_^

I’m getting a kick out of Arthur’s enthusiasm for Mordred’s dye job. Hilarious! XD

Sedrick appeased? Without Azrael’s head? I seriously doubt it. Most likely the sword will be just enough to cover their failure to even keep Mordred under surveillance. I hope for their sake Sedrick is done venting about Azrael by the time they get back. Oh, and considering what happened the last time Camlann was in Garrott Manor, it’d probably be better for everyone if Gawain & Hagen took the boat back and chucked old loudmouth Camlann into the Atlantic. :lol2:

Sedrick looks like an angry puppy in the last panel… :lol2:

Yeah. An angry, homicidal puppy.. :lol2: Poor Sedrick, nothing every goes his way. Liliy doesn’t hate you, it’s just more fun to pick on the characters we love most. :lol:

I could translate it to Dutch, although almost everybody here I know that reads webcomics, is perfectly capable of reading them in english.
But I could.

Yeah. XD That is part of what makes it hard to pick a second language…

I don’t know how fast I could do it, but Dutch is my first language and as such I could easily translate it in that.

Maybe you could pay with add space or something? :3

Although I feel like I should have remembered you spoke Dutch~ You’ve mentioned it before. XD

Dutch people are scary: They are everywhere ;)

I didn’t realise you offered it too XD;;

i’ve been meaning to ask: are we ever going to hear how wiglaf got the title the devil of Bohslän? it’s been driving me crazy.

Ah, Arthur, your prioritizing is as terrible as always. :P

I’d offer translating into Swedish, but that would just turn hilarious and silly whenever Wiglaf falls back on his native tongue. :lol2:

He’d just have to start spouting things in English. XD

…he needs to use Swedish more often. Curse needing to know that dialogue in advance so it can be translated. XD