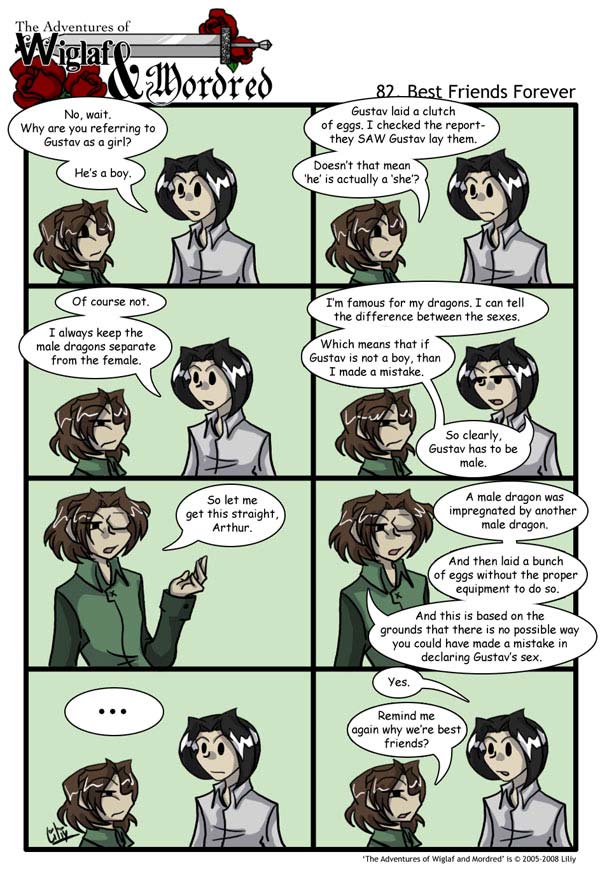 Ha ha, poor Sedrick. You’d never think that Arthur was two years older. Though, you might believe that they’ve known each other since grade school. *pats them* Yay for childhood friends.

Oh, and I’ve made my final decision – Wiglaf and Mordred will be returning for strip 100. Which means, we’ve got 18 strips to go before their next arc.

So, I’ll be making a pin-up for strip 90 featuring the boys and since I’m feeling generous – I’ll let you guys pick what it’ll be about. :D Just choose one of the following and list it in your comment (and why you picked it – if you want. *nods sagely*). Have fun!

Yay for one word answers

I vote for number one (although number 3 would be funny too, with Driver and Brat fangirling in the back ground)

Sedrick’s extended review of the illogic of Arthur’s position contrasts humorously with Arthur’s obstinacy. I have to wonder how they’ve stayed best friends for so long. Perhaps Sedrick finds Arthur’s pridefulness endearing.

I’m voting for #1–Cowboy costumes would be neat for Wiglaf and Mordred. And I agree with Ookaminokishi that it would be cool to have Driver and Brat watching in the background, if that were feasible.

I’d vote for #2, if I could think of an idea for costumes, but #1 would be cool to see.^^ Number 3 would be a little bit weird in my opinion, like the last pin-up you did of them.^^

Villainous egos are so crazy. XD

I’ll vote for #2, with Wiglaf as Korben Dallas and Mordred as Ruby Rhod. :D

Cowboys. Definitely cowboys. It would be like seeing “Ringo” done up in images. :)

I vote for option 3! French maids all the way! Ookaminokishi has an awesome idea for the background. *evil grin*

I’m going to vote for cowboys.

French Mai…what? Too late? Darn! *walks off in a huff because I can’t afford a taxi*