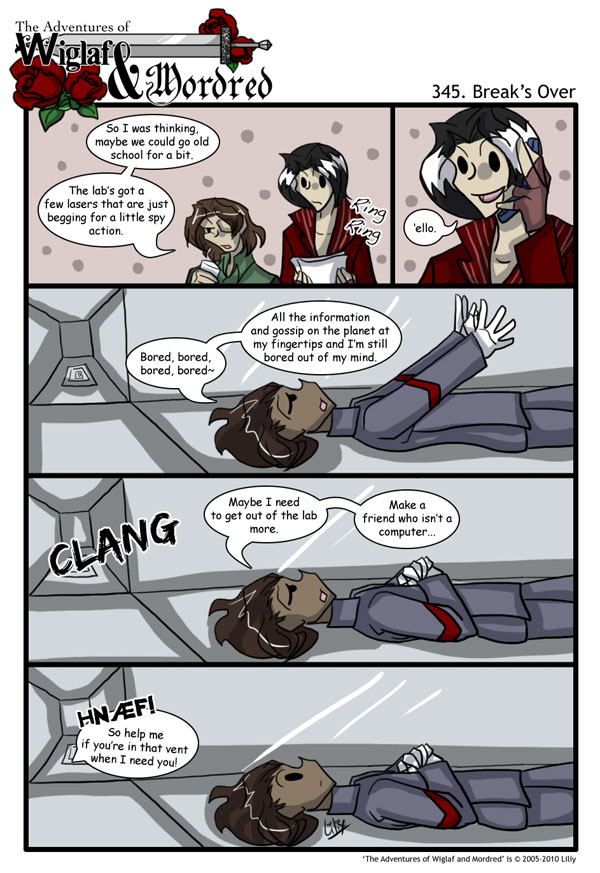 So, I hear the line from the new A Nightmare on Elm Street trailer where Freddy/Rorschach says “Why are you screaming? I haven’t even cut you yet.” and I kinda for the first time wanted to see a horror film. Believe it or not but I don’t usually handle movie gore very well so I’ve tended to stay away from the horror genre.

But I really wanna see this movie. So I’ve been prepping myself! I’m working my way through the Freddy movies and I’ve knocked out the first two. Little bothered here and there but that wonderful thing called culture shock helped it from being too scary. XD Wish me luck moving down the list!

On an unrelated note – today’s strip finally bothers me. Having now drawn ductwork (once or twice – I’m in the Electrical section gosh darn it!) into floor plans it occurs to me just how unrealistic these vents are. But I like the idea of Hnæf hanging out in them so much I don’t care. Hurrah!

*pats him* He’s got another friend…hanging around somewhere. *looks for him*

Hurray for the Nightmare movies! They really aren’t scary anymore; mostly gross at parts, and hilarious once you get into the later ones. Except New Nightmare… that one’s still pretty creepy. I can’t wait for the remake next month.

aw, poor kid. typical genius loneliness.
but he’s still got time! he can make a friend!

So great. :D
I just love Arthur’s lines in this.

someones been ratted out i see XD

Just remember all movie, TV and comic strip air ducts are 4X life-size at a minimum.

Isn’t that the truth. XD

Draw the vents the way YOU see them. They don’t call it artistic license for nothing.

Btw on a side note, I made a pair of Freddy Kruger gloves for Halloween with “blood” dripping from the tips. Scared the kids nicely.

Heh, I just started reading this comic yesterday, and got to this page yesterday. Great comic. ;]

Ah Hnæf, by far one of my favorite characters. =D Though I still can’t quite figure out how to actually pronounce his name…

Ha-ha, keep up the good work, can’t wait to see what happens next. :)

Also, enjoy your horror movie. xD I tend to watch quite a few horror movies myself, but Nightmare On Elm Street has always been one I kind of avoided. It tends to get a bit more “adult” content then I like. Blood and gore doesn’t bother me but certain ‘other’ content does. :sly:

You and me both. XD A pronunciation guide claims “hnaff” (or “hnaf”). At least it’s not as bad as the Valkyrie sisters and their names. Heh~

Yeah, allot of the names tend to get me confused, trying to figure out how to pronounce them. xD But I still love all their names. :D Speaking of which, how is Valkyrie pronounced? 0_0

Valkyrie is usually “val-keer-eez” in English. As far as their first names go, I’d have to actually go look those up as I haven’t found anything convenient. And at the moment I’m lazy and usually keep myself busy just remembering how to spell their names. XD

Ah, I see. Now I could sit here all day asking how to pronounce certain characters first and last names, but I think I shall spare you of that, sense it sort of wastes time. Ah, you should put how to pronounce their names in the character information sometime. xD Now, I shall leave you to your horror movie watching. >>

What about Security? :| Didn’t he make friends with him? :raisebrow: Love Arthur’s last line there XP

Also, it’s Arthur’s place…vents aren’t supposed to be normal any more than his family is. :lol:

Hnaef is channeling his inner Sherlock. Love it. :geek:

For most people who doesn’t know anything about vents and electrical works (aka: me), the vents look perfect :)