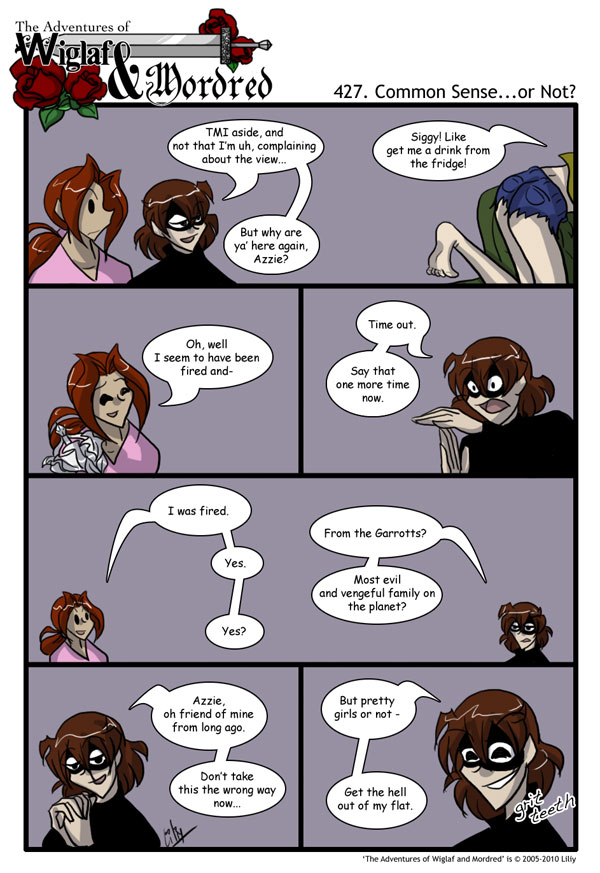 Um. Feel much better than I did yesterday. Another early night should get me straight for Thursday’s Ustream.

oh, and since someone finally commented on it – yes, my RSS feed is about 24 or so hours behind. I don’t know why and I haven’t had time to fix it. If anyone knows enough about RSS to help me fix it…you can drop me an e-mail and that would be awesome~

And there be new fanart in the fanart section.

Alright; off to bed with me! Remember kids…don’t get sick. *_*

EDIT: For the record…this was done on time… (which is why I’m keeping the time as midnight… XD ) It was  just scheduled it for the wrong time…. *just fixed*

Edit 2: I will be fixing Gen’s glorious typo as soon as I get home from work. *stares at it*

“Earth Angel” by The Penguins

Heh heh, Gen is right to be alarmed. There’s no telling when the Garrotts may come after Azrael and endanger Gen in the process (and Gen doesn’t know that Arthur at least wanted to protect Azzie by firing him). Not that Gen isn’t obviously enjoying himself admiring Svafa’s physique in the meantime, of course. :D

That’s a really convincing look of innocence you’ve got going on in panel 2, Azzie :raisebrow:

How many days into Azrael’s and the Valkyries’ stays is Generic asking this question? What we do know about Svafa’s dressing habits and what we don’t know about Azrael’s non-uniform dressing habits means this could easily follow up from the last conversation, or it could be an entirely different day.

This is immediately after the last conversation. XD So same day.

I just found this, and suddenly I feel like I understand the family better (especially since Boudica’s the tame one)

Oh my gosh! That was the BEST history book series the Brits ever published, and I collected all of them! Now they’ve gone and made a TV program out of them?! WOOT!

They really did have such high hopes for all of them. Those names just didn’t sink in like they were supposed to….heh.

Oh Gen… You smart, smart fellow. I wouldn’t let him stay in my house if that had happened either… Then again saying no at this point may be a bit too late.

‘specially with the Valkyries in the place.

Silly, then he just loots his own valuables and runs. He stole it all before, he can steal it again right?

Y’know, after your art in the last two updates I have to say I’m curious what you’re using for reference material these days Liliy.

Okay, after a five-plus minute surf of your blog, the pages of this site and your deviantart page I didn’t find anything that described what you use for reference. Did I fail to dig deep enough or are you not answering that question?

*shrug* If you mean reference for drawing….not much for WaM Actually. XD But if I need a ref I usually just do a google search and use whatever pops up….

Hmm, when I considered learning how to draw briefly the people I asked mostly told me to pick up an copy of Gray’s Anatomy and work through every section in the book.
I considered it and did a back-of-napkin calculation on how many years that was likely to take me. The number was over a decade at the time and I gave up.
Old versions can go reasonably cheaply though.