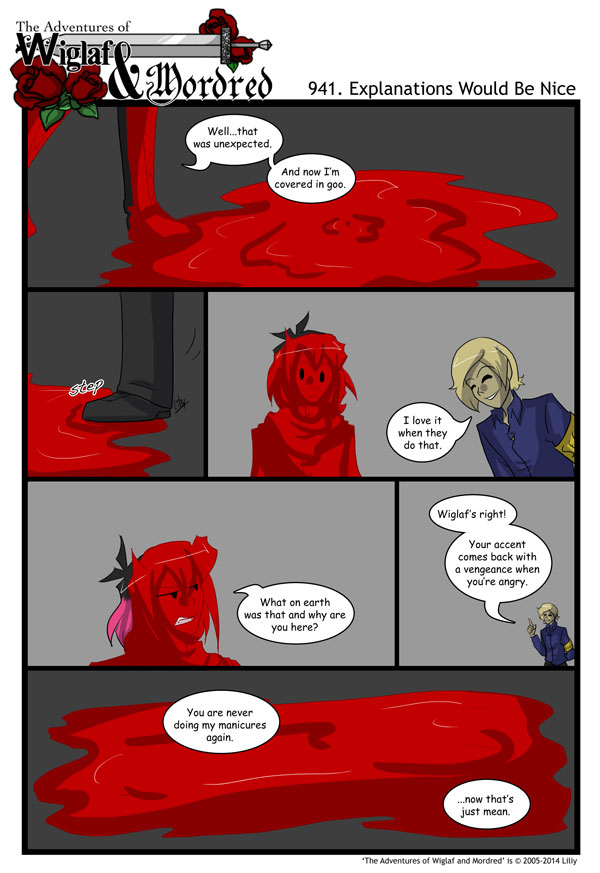 Explanations Would Be Nice

I was done early for a change, and I forgot to upload it. XD So it’s still going up 3 minutes late.

Look! A strip that looks decent for a change. XD Getting my groove back~

Edit: One step forward, two back. I really need to work out a better updating schedule. XD Ended up running errands longer than planned, and now…I’m just tired. I’ll try to get a strip before Thursday morning. XD;

Edit 2: I lied. I got super distracted and forgot I hadn’t drawn my comic and I decided to draw something else instead because I can. You’ll get a WaM Friday. Promise…. :D

(On an unrelated note, I was re-reading WaM and realized how many of these edits there are. It’s almost embarrassing, but I was laughing so hard at them, that they’ve almost become part of the strip. XD)

Maybe we’ll finally figure out WHAT THE HECK, SECURITY????

Has Liliy been watching Dr. Who?? Was Wiglaf a nesting duplicate?

I have no idea what that is, so I guess not. XD

Does the goo taste of strawberries? It would be so rude to be covered in goo and not have it taste of something nice. :P

Actually, looks like ketchup to me. Better then the alternative, (ie. blood).

Maybe. But you know how webcomic artists love to mess with their readers.

You mean even more than they like to mess with their characters?
[well those filled with actual personalities, plot and other fun stuff including snozzberries - can't forget the snozzberries]

So where on earth is Wiglaf, then?

Snuck up behind Vilhelm?