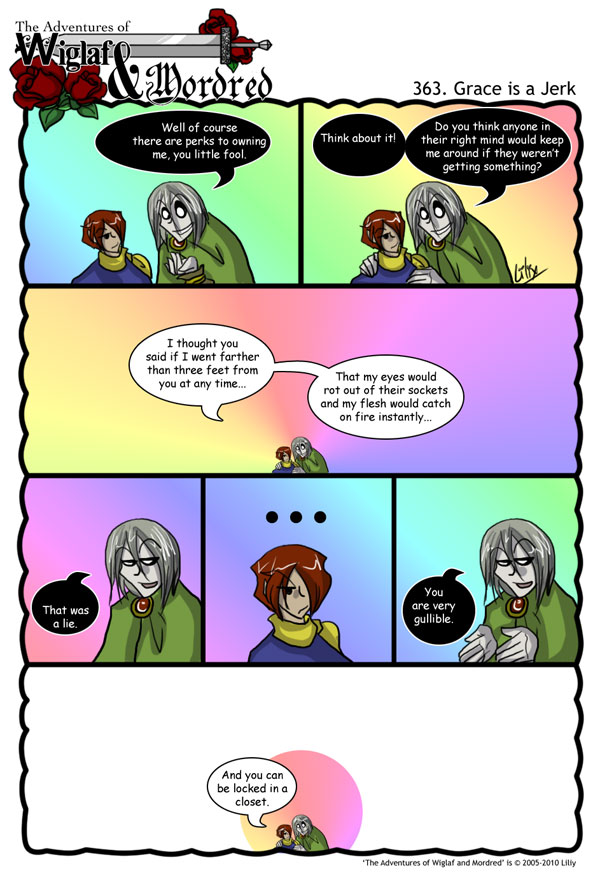 Grace is a Jerk

Ha ha ha. I mislead you all. We still don’t know what the perks are. Azrael wanted a last line and I suppose I had to give it to him.

WaM is a sketch b/c my brother came home from college and decided we had to watch DBZ the Abridged. *cough* I didn’t even start WaM until midnight. XD And I need sleep.

Oh! But in other news – WaM got it’s first Donation (from someone who I don’t know personally!) !!! *Squee* Someone thinks my comic is worth a dollar amount. XD

Either way, I’m giddy and I want to give something back – so that means it’s time for me to join the ranks of all other webcomics out there and offer….duh duh duh….a Donation Wallpaper.

Sadly, I can’t think of what I want to do for it so you guys can help by voting in this friendly poll! I think I’ll let it run the weekend & see what pops up.

“The Kids Aren’t Alright”  by The Offspring

Even if Grace is a jerk, he still amuses me and Azrael’s getting upitty and snarky with him!! xD That is win.

Also, I totally vote for Young Master and Madame Garrott– Wiglaf & Mordred are a staple, but to see some of the interaction between the two heads of the family when they were young is a horse of a different color and a rare treat!!!

“And you can be locked in a closet.” Ha-ha, I love it! xD Grace kinda scares me sometimes, I love the lie though…and I love how he actually believed it. XD UH, I disappeared for a while, glad to finally be able to read the comic again! ^^

Congrats on your donation, by the way! :happy:

I like Azrael’s indignant look in panel 5. It’s very funny how Grace is such a blatant liar. I like Grace’s funny faces in panels 1 and 2.

Congratulations on the donation! That’s fantastic.

Fantastic titling. Grace IS a jerk. Really.
But he’s also full of win, so he’s in the green.

Yet again you leave only questions about Grace though.
The suspense is becoming ridiculous!
What you should do is keep progressing the storyline and keep coming up with new questions about Grace but not answering them. Then, at the very end of the whole arc have a page where he manages to reveal everything at once!

That would be awesome, but also waiting for the end of the arc would suck.

I know I’ve mentioned this before, but it’s getting to me again. The overall art is steadily getting better, but the big black eyes are looking out of place and creepy.

…at least that works in favor for Grace. Heh.

And hoo-ray for Azrael getting the last line. It was definitely the perfect line for this strip. :D

Grace is a lying little shit!!!!!! but alas i also love him

I completely forgive you for posting a sketch because of Team Four Star, as Ive done the same thing.
YOUR LIFE IS SPARED, FOR NOW, MINSTREL :P
Cool strip. I love how Grace uses “you little fool” as a term of endearment :lol2:

After that one ustream session, I now understand the whole, 3 feet away thing and why Grace doesn’t want him any farther away than that.