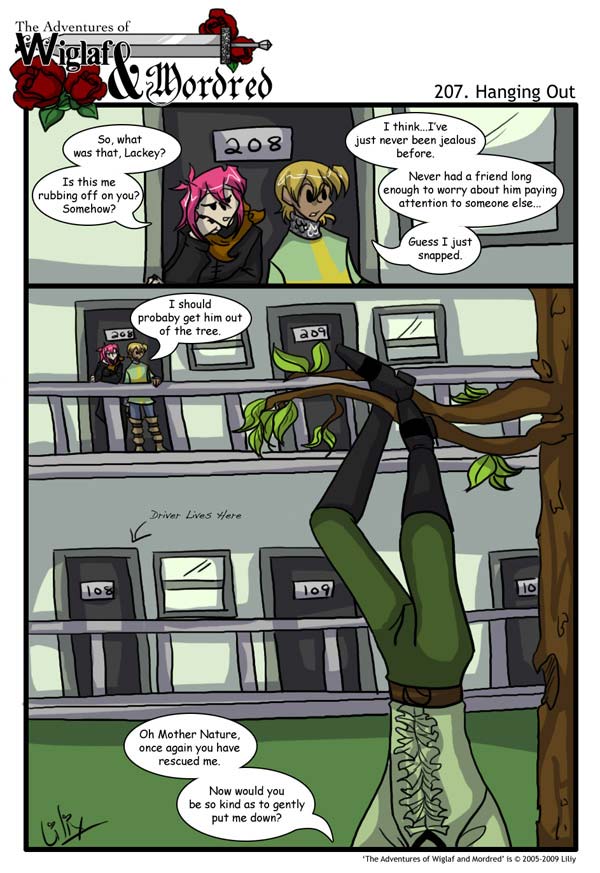 Had to work late today, and have to be in early tomorrow. That cut(s) my drawing time quite a bit as I need to turn in early. I probably could have done more than a sketch…but I’m distracted easily and I was tired. Heh. :injured:

I just had a horribly long Friday. XD I was tired and I saw a movie after work instead of doing WAM. At least I got it inked. *dies* Tomorrow’s going to be crazy catching up. XD

There. It’s in color. XD

Ha ha; Poor Lancelot. He didn’t do anything wrong. Just…in the wrong spot at the wrong time and messing with the wrong friend. *pats him*

At least Mother Nature looks out for him.

“One Way or Another” by Blondie

“I should probably get him out of the tree.”

I was RIGHT! HA HA! saved by his faceless, voiceless, mindless plant friends.

Hey, that’s mean. Just because they don’t have any feelings, thoughts, personality or emotions doesn’t you can ignore them. Trees are people too!

Daffodils you can make fun of though. Daffodils are jerks.

XD I will laugh so hard if that branch snaps and drops him… Because that seriously looks like it can happen.

And hey… When did the apartment door close beind Mordred & Wiglaf?

Lancelot looks like The Hanged Man in my deck of Tarot cards, which I think has something to do with willing sacrifice, lack of progress, stamina, and changing directions or perspectives. Poor dude.

what what in the butt? (lol) hmm i wonder what hes going to do..

I feel bad for Driver.

Who is probably gassing up her chainsaw to “help” Lancelot out of the tree. heh heh heh Wow, this comic really brings out the best in me.

…Wait. Isn’t Driver’s apartment one floor down and to the LEFT? Or did she manage to move next door in the four and a half chapters since that was mentioned?

…I feel like such a nerd for noticing that. XD