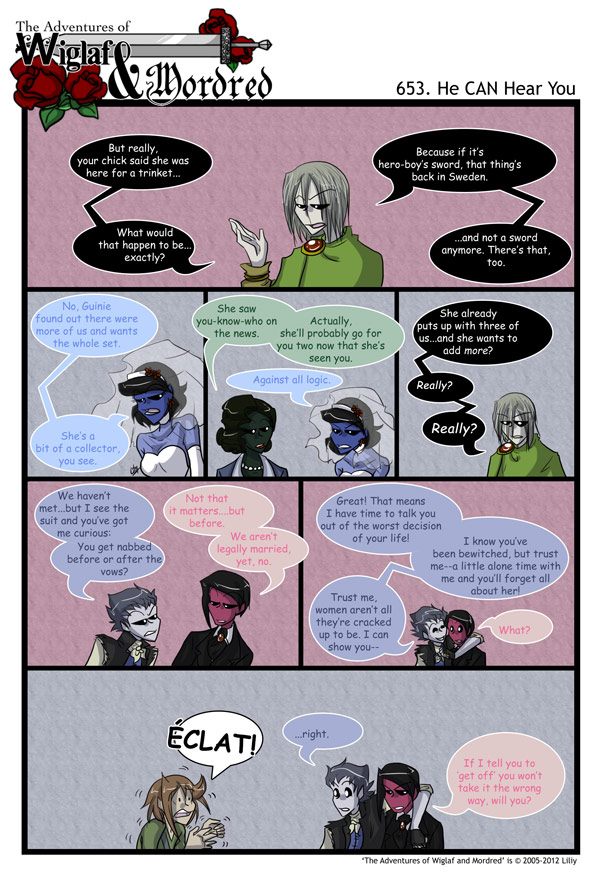 He CAN Hear You

I don’t even know what’s going on with WaM. Éclat needs to behave himself.

More importantly: It’s the 100th Anniversary of the Sinking of the RMS Titanic. That’s kinda crazy. I don’t know why, but it’s just sort of a ‘wow’ thing.

“The Once-ler’s Traveling Madness” from The Lorax (Only on The Soundtrack.)

*here not hear in Grace’s speech there liliy.

Aha, poor Ben, just what you don’t want to be hearing.

I think Lily misspelled “wat.” as “What?”

I love it Liliy! Don’t lose faith! If nothing else, call upon your large (although quiet) fanbase to support you.

See, now I’m curious. I’d assumed they just happened to, say, die at convenient times or something, but Eclat’s wording seems to imply it was very specific. Like they were kidnapped by someone specifically to be bound to the items? Very very interesting.

Particularly since the couple are bound to a couple of rings. I’m thinking they were taken and bound to items the victims had on their person.

See, that’s the thing. The lovebirds and their items clearly have a thematic connection, but the others don’t, so far. It’s possible raggedy Grace had a really fine sword on his person, I suppose, but a housewife with a scimetar? It’s almost like the couple was bound by someone else than the others, with more of a sense of…irony, I suppose.

It could be death is the tying factor, in tales of ghosts and wot not, when a person dies in a horrible way (murder, explosives, stupidity, duels, et al) the spirit is tied to an object that they now haunt. Whatever the object is has signifigance to the dead spirit in some way, although if Bliss liked an orb… nevermind, shiny object. As for a housewife with a scythe, maybe she found divorce to pricey and her hubby had a better quickdraw than she thought.

Have you met very many sword people? The scimitar could have been a gift from her husband (maybe an adventurer?) Okay, now I’m just making things up.

Uhhh… Yeah, I kinda have two scimitars in my home and am very attatched to them. And like Miss Anata said, ghosts have a tendancy to haunt objects that were important to them in life. Maybe she used it to fend off persistant vacuum-cleaner salesmen.

It always struck me that Bliss died on the Titanic. Or the 1906 SF earthquake. I dunno she fits for both

I know this was last comic, but what happened in 1645?
Based on everything thus far, no way twenty of those get together and nothing happens.

Jan 5th – Charles, Duke of Orléans, French poet (b. 1394)
May 12th – Thomas Palaeologus, Despot of the Despotate of Morea

Didn’t even know Despotate was a word, like principality or kingdom I guess.

I think Liliy just made up the date

I looked up the date too. Oh well.
Maybe it was, “Date Unknown – Massive flooding in central and southern China motivates the initial construction of hundreds of new bridges under the Ming Dynasty”
That sure sounds like the kind of big chaos they cause.
Personally, Liliy always seems to have at least one Chekhov’s gun concealed up her sleeve.