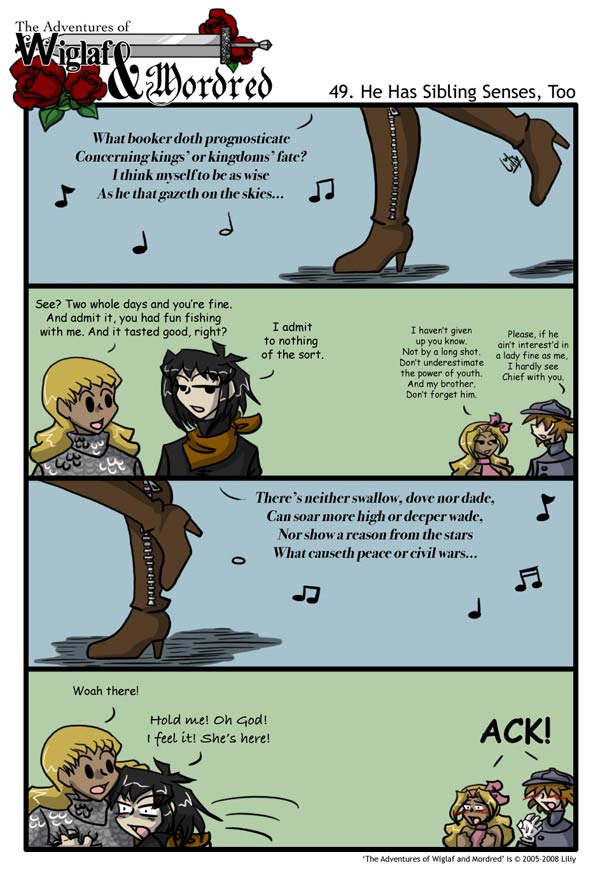 He Has Sibling Senses, Too

If you’re curious about the first and third panel, those are song lyrics from “When the King Enjoys His Own Again,” an English Cavalier song from the 17th century. I thought it was about time we had a reference to British literature again since that’s where this comic got its start in the first place. And if you already knew that, go get yourself a cookie. :D

I love Mordred. I do torture him so- and on that note: Strip 50. Janus. Friday. Be there. And remember to have low expectations because nothing ever lives up to its hype. Don’t be fooled! XD

In other news, this is probably the first strip where I actually drew Mordred his proper height. He’s a good two-three inches taller than Wiglaf…heh.

EDIT: Thanks to Blackford! His comment ended up pointing out a typo on my part. XD It’s “dove nor dade” not “dove nor date” Ha ha; thanks again! This is why I love comments. :)

I like the inclusion of this Cavalier song….I have to remember to look up the song and read the rest of it some time. These lyrics are great: “There’s neither swallow, dove nor date,/ Can soar more high or deeper wade.” Very cool.

I love the fact that we see Brat and Driver actually speaking to each other for the first time. And the sickened, horrorstruck looks on Mordred, Brat and Driver are awesome. Another indication that this Janus is truly a holy terror. “Hold me! Oh God! I feel it! She’s here!” Hehehe Says it all!

So Mordred is more afraid of Janus than Arthur, huh? Well, that does set the bar pretty high for Friday, especially since Arthur’s brother complex is scary in its own right. Fear Janus, the ultimate smotherer!

I do so love the expression on Mordred’s face. I just wish there had been more of a transition between panels. You have Janus singing and getting closer and then Mordred’s panic. There’s no moment where we see him actually pause to identify the threat. Ooooh, or maybe his senses are just THAT good.

And you go, Driver! If Mordred doesn’t want her, then he certainly wouldn’t want anyone else. The ego doth surprise. Mwahaha, but I do feel for the girls in the last panel. Mordred’s seeking shelter from the wrong person. XD

Oh, my. Does singing this mean she is merely an afficianado of jaunty ballads, or that she is truly a proponant of loss-filled causes? She also chose both lines referring disrespectfully to fortune tellers; given the god that shares her name, I suppose I can see why…

Mordred’s panic is priceless. :D I’d bet Janus trampled his roses and burned his poems when he was young to scar his psyche.

Hmm… blue background for Janus, so she’s probably still on asphalt yet. Green background for the other four, so they’re just a touch out in the wilderness. Everyone meets back at the camp, right?

Ah, Janus is going to be so much fun. XD I love her panels, and the song. This is a great suspense-building strip.

Poor Mordred, though… he’s terrified. ^_^; I’m sure Wiglaf doesn’t mind… *cough* It’s good to see the Brat and Driver finally confronting each other; I’m still hoping for an all-out battle for Mordred’s affection, though. =D

I’ve just finished reading up to this point. I really like this comic! It’s so fun to read and I love the characters!

Mordred’s sudden terror is just awesome. Not that I have anything against him, mind you. I just love how his sibling senses are instantaneous. He’s all calm and collected one minute, and then BAM! He’s having a mini-heart-attack. Poor guy.

The last panel is perfection.

I love Driver and Brat’s reaction to Mordred grabbing Wiglaf.

i find it amusing that the girls are blushing so much. no matter how much they love a boy, :happy: girls just can’t deny how cute it would be if they were gay.

lol i love Mordreds’ face in the last panel! haha and it looks like the girls might slowley turn into slash fans :D

I love the last panel so much. For both the humor and the joy it gives my inner fangirl to see Mordred clinging to Wiglaf.