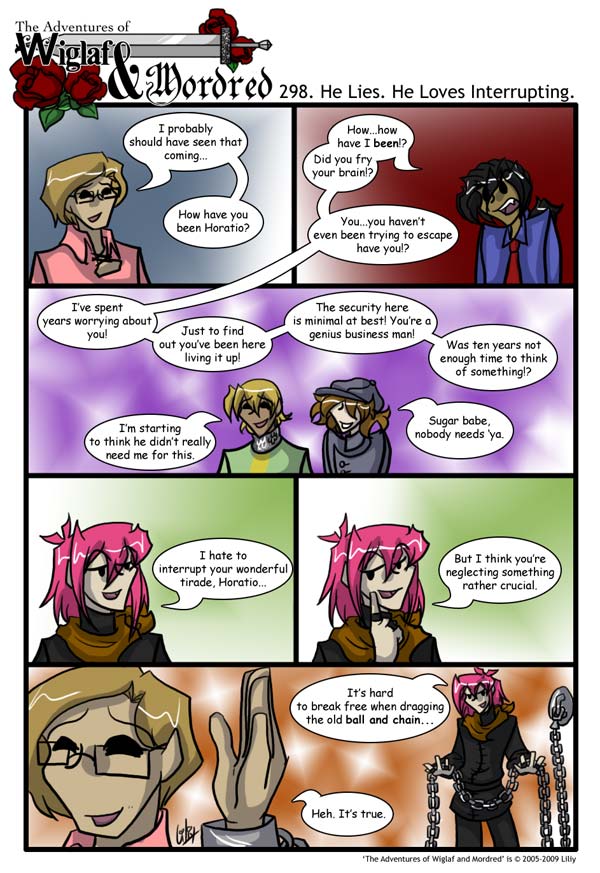 He Lies. He Loves Interrupting.

I think Driver got the best line. It’s been so long since she got to be snarky to Wiglaf. She still does ‘hate’ him after all. :D

Poor Geoffry. He’s made Horatio upset. You won’t like Horatio when he’s upset…GRRR!!!!!

Sorry. In a giddy mood. I was pleasantly surprised by a movie. Found the new “Alvin and the Chipmunks” movie in a bin for $8 and went ‘what the heck?’ to see it (since the sequel actually looks interesting with the Chipettes and all…).

It was good. I ended up laughing and giggling the whole movie. Definitely going to go catch the sequel.

Ah Driver; she’s so cheeky. XD It’s alway fun to see her being snarky to Wiglaf. And That last line… XD

Heh. Horatio and Geoffry. Can is hip, now? :happy:

*ship. Also, good strip. Horatio does have a knack to overlook things…His clothes, his look, and some obvious things. :$

So, that’s 0_0 #1 for Horatio. #2 will be the marriage. #3 will be Safir. At that point it doesn’t matter because Horatio will have either gone insane or fled the comic and stay as far away as possible. Poor Horatio. The universe exists to hurt him. :D

wow. Geoffrey is in for a surprise.

Yay, snarky Driver is the best! You drew a really cute smile on her.

I like how we can see the entire chain holding Geofrry back. It has pretty big links, so it must be a heavy one.

Oh Mordred, how long has it been since you got to actually make a valid point AND have fun with it? :P

I wonder if Horatio ever thought to call the estate. <_<

I love driver’s line! For some reason when I read it it was in Hades’ voice form Hercules in my head…weird.

Also, Mordred and his double entendre. Should Geoffry have a ring?

…He doesn’t even look like he wants to escape, does he?

I can’t believe none of us saw this coming. :B
Liliy, you are awesomeness. Are you accepting apprentices?

You know, last semester there was a girl in my class who looked exactly like Driver. It was really odd.

Need to file that line away for later..

Janus knew this day would come… that’s why she kept chaining him up! :lol:

But would Geoffry escape if he was free? Or does he have a severe case of stockholm syndrome? Or is it love luuuuuurvvveeee??

I love Mordred's hair a lot now. Don't ever go back to black!