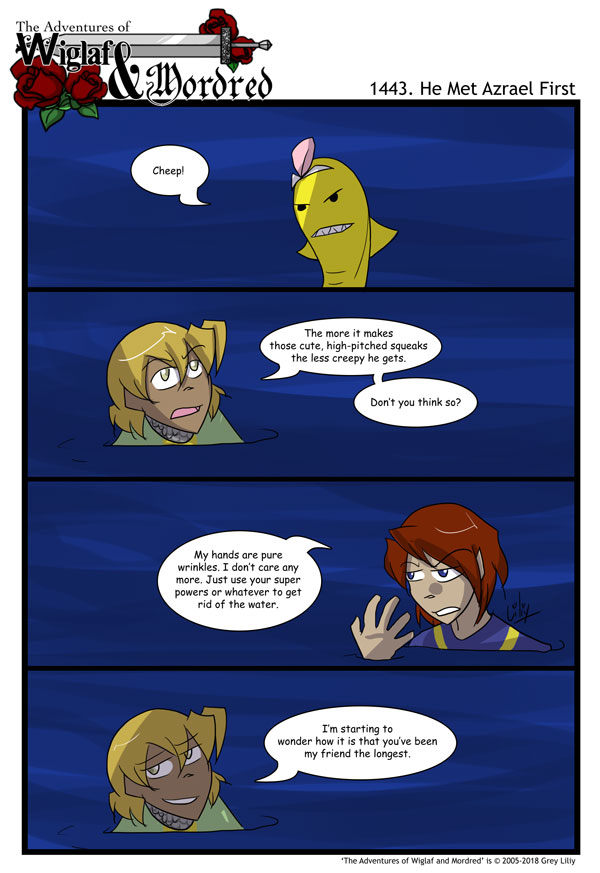 When writing this strip I had to remind myself that Wiglaf had been fighting Azrael & The Garrott family LONG before he even knew who Mordred was. They’ve known each other a long time. XD

Edit: There won’t be a strip today/Friday. I was a dummy who forgot she had three rehearsals and a concert this weekend. Oops. Long story short I spent all Friday evening at a dress rehearsal and I need to wake up early for different concert’s rehearsal on Saturday. But I did get the next strip sketched! So hopefully sometime between this buys weekend I’ll get it posted by Sunday. Wish my luck in the concert! :D

Um.. if that was friendship, I’d rather not have friends..

A friend is an enemy you haven’t killed yet?

Nice. But that definition needs to be more precise.
“A friend is an enemy you haven’t killed yet, even if you tried a few times”?

Otherwise every enemy he fights at the moment would be his friend..

Oh, it’s something like “the next best thing to reliable friend is reliable enemy”, right?

“Otherwise every enemy he fights at the moment would be his friend..”

Now I want an “Ask the Character” thing. We know Wiglaf was/is terrible with friendships (WAM started with Wiglaf having been ditched in a foreign country by people he called friends) so I really wonder what he thinks friendship is and how it works.