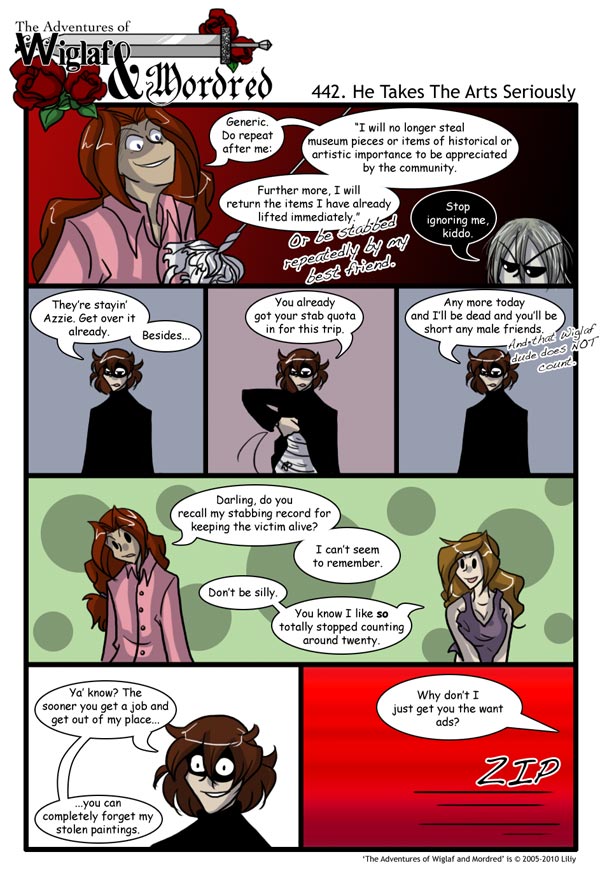 He Takes The Arts Seriously

I think Generic found Azrael’s berserk button. Quick! Someone go update TVTropes!  And while you’re at it – someone update the blasted CMoA page. Someone said WaM had a lot but I only see one people! XD

Uh…back to the topic at hand. Azrael does not like it when you steal art and ancient artifacts. It makes him angry. You wouldn’t like him when he gets angry. Ha ha. You really thought I gave up on the tropes thing, didn’t you? Mwa ha ha ha.

But seriously. Generic should know better. I feel like I keep having to tell him but he just keeps messing up.

But yay for the first WaM I’ve been really happy with in a while. I think it’s the first panel. I can’t recall Azrael ever being this angry. If you can – list the strip. XD

EDIT: WaM will be really late on Friday. Expect to see it Saturday morning. But you can stop by the Friday Ustream & join us if you want! Most likely will start around 7pm est! :D

“Total Eclipse of the Heart” by Bonnie Taylor

Yah! first comment! ^(=^.^=)^anywhoodle, can’t think of when Azzie’s ever been that angry, but it is interesting to see him like that. and apparently Generic doesn’t know that Grace is a male, so thus negating his comment in panel four(i think, is Grace Azrael’s friend?(=~.~=))i love how Gen’s so nonchalant about getting stabbed by Azrael, must be used to it by now or something(=^.^=), and i did not know it was possible to be intimidating in pink pajamas until now…(=0.0=) time for sleep now, been awake too long today….(=-.-=)

It’s the little touches. He’s a renowned jerk with noted sadistic and mass-murderous tendencies that does not play nice with the law… but he insists that those plebs he’d kill without a second thought have free access to the treasures of antiquity?

Just because he would kill them without a second thought doesn’t meant they shouldn’t be educated and enlightened when he’s not slaughtering them, right? :D

Are we sure Gen doesn’t have a death wish? Because I’m pretty sure to ignore Azraels wishes at this point requires a death wish, since he’s obviously not stupid (he was smart enough to steal those things, after all). Though I love that he mentioned Wiglaf would even possibly be considered as a friend by Azzie. Hate-bromance or something? XD
(But yeah… Good luck getting to sleep now, me! Well done, Liliy :) )

Apparently they’ve gotten in enough fights with each other, with Azrael losing them all, that Gen suspects he’s showing some masochism thing by it. Azrael did just admit to having no romantic interest whatsoever in the three sisters so Gen’s prepped and primed to start looking at his social life and sexuality in a very different way.

As far as Gen’s deathwish… he is still Azrael’s friend and that may be a requirement.

Yay!! All caught up.

yay all around! :lol:

I’m totally loving Generic here… though he seriously needs to learn to read the situation a bit better.

Azrael’s “Darling” there was amazing. I love his dialouge on this page so much! I just think it gets to the heart of who he is.

I’m trying so hard to come up with a job Azreal might be able to hold down. I’m voting for retail. Specifically, the returns department. It’s so much fun to be in the only position in a store where you can tell the customers ‘no’. Though I guess he would miss the stabbing…

how about sword fighting instructor?

Pros: It is major badass points to be personally instructed in swordplay by a man this infamous.

Cons: You would be dead after Grace has a temper tantrum at some point within the first week.

well yeah, he would…fine, how about a bodyguard? or an assassin? (that came from my roommate) or a…or a…okay i’ll come up with something else later

thought of some others: translator, he could open up a muffin shop, and professional poker player, of course those would all require Garce’s help so the possibility of someone getting hurt is inevitable…(=^.^=)

Assassin is actually a good fit for him but with the reputation of being fired from the Garrotts hanging over him I think he’s going to have great trouble getting ANY job. Who wants to risk their wrath?

How bout professional Scrabble player? He uses big words on occasion. A yoga instructor? oh wait, here’s one, a Rock Star, Rock Stars can get away with almost anything, them and artists. :sly:

Yeah, but he would probably get blood all over the paintings when Grace was in one of his moods. :omg:

that’s where protective glass comes in, easy to clean.

Why should refusing to hear customer complaints and stabbing them be mutually exclusive?

If word gets around that the complaints department is staffed by a guy who will kill you for coming to the desk, well, that will tend to limit business.

or at least limit complaints, which might be a good thing. :X

A job where using a blade with skill is expected and the spraying of blood is just part of doing business. Wow this is a hard one …*ponders*

Abattoir seems just so appropriate though. Grace might get annoyed to be used only on four legged clients instead of the two legged variety. :meh:

War reenactor? No, he would actually kill people. He and Grace could go to Rwanda… You know, I think we need to get Azzie a time machine, there are tons of jobs in the past he would be well suited for. :/

HA! I love Azzy’s evil face of anger!!
I was reading this with a friend, and when she saw panel three she yelled out “OOOooOO!! Strip tease from the art thief dude!!!” :love:
ME:”FRIEND! He’s a burglar, get it right!”
FRIEND: “Sorry, strip tease from the Burglar dude.” :(
ME: “that’s Mr. Burglar to you.” :meh:
Needless to say, once again WaM has brought great joy into my life. and for that, we salute you! :D

Awww, Azzie has Wiglaf’s “don’t tell him who I am” face.

Demonic; omg I just wet myself, please get me out of here scary.

Did we ever actually find out why he was called the “Demon of Bohuslan”? WILL we ever? Please?

And I’m still sort of laughing at the fact that Gen is COMPETENT. I guess his previous faliures were because Wiglaf was involved?

Did you plan Generic’s character or was he sort of a “running-joke-becomes-an-important-character” thing?

The second. I needed kiddie Azrael to have friends but wasn’t allowed to introduce anyone new (self imposed limit XD). So he got volunteered.

Man, Gen and Azzy have a weird friendship. I like it!

:$ I love Azzy’s face in the first panel, classic

Azzy (panel 1): This is my serious face.

Let’s nominate jobs for Azrael then. I suggest they pay him to be the guy who kills all those invasive species in Australia.