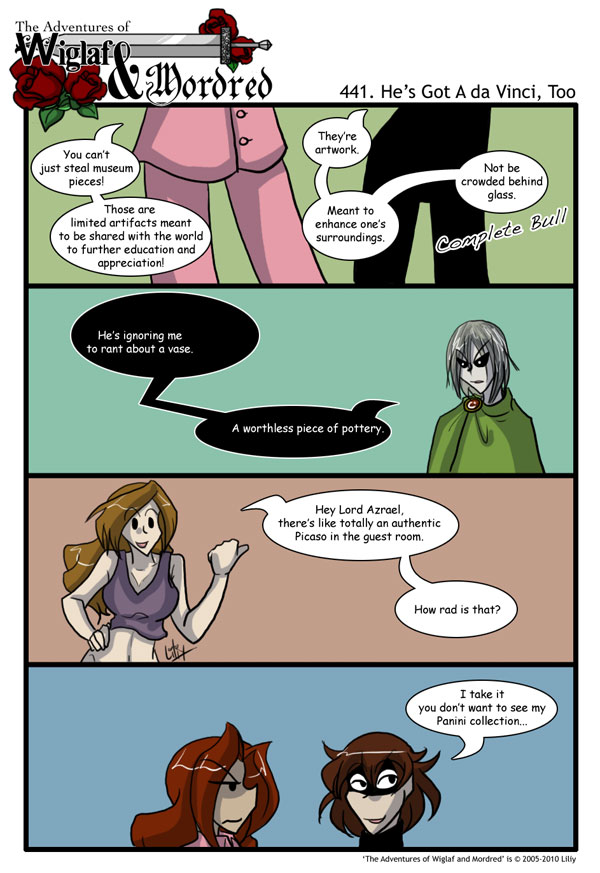 He’s Got A da Vinci, Too

I love Azrael’s Pajamas. XD Just putting that out there.

Grace does not like to be ignored and now you know Sváfa doesn’t sleep with her hair up.

Well, Saturday was a blast at Nekocon!! I ended up hanging out at Tamuran’s table for a couple hours & played my violin while Eren played guitar.  We had a mini folk song jam session thing. It was fun & Humi dropped by (in a cute Hungary cosplay~) for a visit & I don’t know if she knows this, but got the first ‘Liliy’ autograph for WaM. XD

But yes. Lots of fun to be had & I’m already getting pressured into getting my own table at NekoCon next year…we’ll see where that goes…

But now…off to working on my NaNoWriMo novel. XD

“Go the Distance” from Hercules.

heh.. I guess Gen is good at what he does, when his luck isn’t going badly. I like his smug look.

For a second there I thought Gen had a sandwich collection.

i thought the same thing! :P

I wish /I/ had original artwork like that in my house. Well then again, maybe not with my grace and balance. Haha. Also, Grandma told me about your autograph thing. Glad you had a good time!

I like prints myself. XD I don’t trust myself around originals.

Indeed. But in all fairness I think it was because Mamaw came to my Concert Band performance last night and it just happened into the conversation. But yeah. : )

So Gen got some skills?
And Azrael likes art?
you learn new things everyday

huh, If he has such high-quality artifacts in his possession you would think he would be higher on the villiany class, guess a certain hero just likes to ruin his paraid (Unless gen keeps himself low on purpose)

A reputation is a bad thing for a thief of stealth, Wiglaf stops bank raids, where others can get hurt, not midnight museum heists, which he won’t know of until the next day. :D

Poor Grace, getting ignored because of a vase.

Heh. I don’t know who is more angry. Grace or Azrael.

Wow, the first autograph! I feel honored! It was great to meet you by the way. I hope to see you again at nekocon next year!

I’ll probably be there. And if things keep going the way they are I might have a table. XD

*chuckling at Azrael’s reaction* Ha ha, I guess we shouldn’t be surprised by Azrael’s attitude about art. We know that he appreciates church choir music, so he obviously fancies himself a patron of the arts. That explains his furious reaction to Gen’s thievery.

Heh heh, Grace getting all offended over the vase receiving more attention than him is another great piece of characterization. And we get to see Svafa too. No complaints there. We now know she too is an art aficionado. Cool. ^_^

Svafa looks good with her hair down.

OMG–I finally made it to the present! I started reading this strip about a week ago (maybe two, I suck at time), and was shocked to find that there wasn’t a next one. Now I’m going to have to wait for you to update like everyone else. Aw.

BTW, that last pinup raised questions. Questions that I’m too lazy to repeat.

Welcome to the present. XD

I think I love Azrael even more. Between the pink pajamas and his respect for art (not to mention his long, gorgeous hair and sword (albeit an evil one) oh and don’t forget his now gender neutral-ness (i’m totally being vocabularically sensible here)) he’s definately a contender for my love for Wiglaf. *girly sigh and melt*