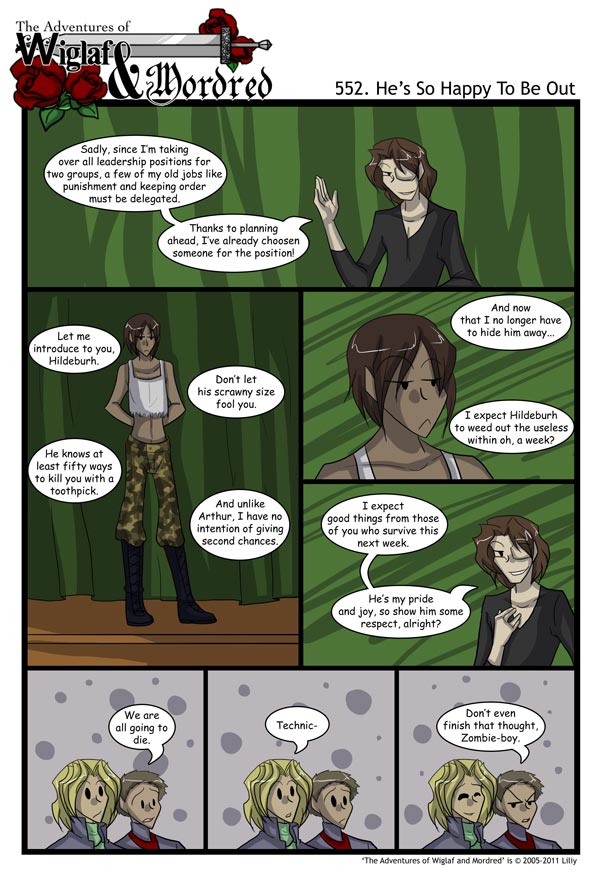 He’s So Happy To Be Out

Before anyone says anything, yes, Hildeburh is a man and yes he’s aware he’s named after a rather famous woman. He deals.

The family trend continues~ And while the timing for his introduction was unexpected, the fact a certain someone had a brother was always planned. XD Just never knew the right moment to introduce the guy.

Most of you can probably guess who Hildeburh is related to. *wink*

I hope everyone had a fun time at Otakon while I was having my mini-freak out. XD sorry about that!!

Well, hopefully unlike his namesake, Hildeburh will not lose his sibling.

Heh, this could be interesting. And that last line XD

Yet, the least time we saw Hneaf (I'm totally bad at names), big evil ol' daddy's being a Creeper.

I wonder what happened to that poor little boy. And I wonder how the relation's between these two brothers. :3

…does hnaef have an older brother?… will hnaef be as scrawny as him when he gets older? 0.o

Hildeburh’s expression in panel three cracks me up. Something about that tiny frown is hilarious.

Strictly out of curiosity, are the two plotlines you’re presenting here (Mordred meeting his lackey’s parents, Sedrick going off his rocker) connected at all? As in, can we eventually expect the two seemingly unrelated stories to convene at some point, probably in a bizarre manner?

Also: if you don’t mind me giving my two cents, it seems to me the Friday updates are only late because of your Thursday night Bible group. I’m not sure what your schedule is like otherwise, but perhaps your best bet might be to change when the comic updates? It’s not like anyone would be bothered by that, even if you switch to just two updates a week. We’d prefer that you keep your job and not overstress yourself.

I grabbed this from Wikipedia “Hildeburh’s position as a link between the two kingdoms and her stoicism are central concepts to the story.” Given your comment, this makes me wonder…

I so want to see this guy die horribly. I don’t know why. Maybe just to truly piss off Sedrick. =^-^=

There are several unisex names that I know of:

Shannon
Ashley
Terry (I know two people with this name, one of each gender)
Leslie

Hm. These are the only ones I can think of off the top of my head, though.

These are the most common ones I know…

“Peter”?! You actually know/knew a girl or woman named Peter???

Hooray, a new character! Interesting name choice too. Naturally, Sedrick needed a new enforcer to keep the troops in line.

with all these new characters lately shouldn’t the relationship chart be updated ? <.<

At least 50 ways? With a TOOTHPICK?

[I live!]
I’d be scared but I’m too busy being entranced by that sexy mantummy.
How do you know my weaknesses?!

-instant nosebleed- I WANT HIM. Lol. Stoic frowners have always been a favorite. And the shirt’s doing some major favors. ;) Great job. Can’t wait to see Hildeburgh… get to work. ;)

Please don’t kill Hnaef! Let the names be the only things in common with their namesakes!