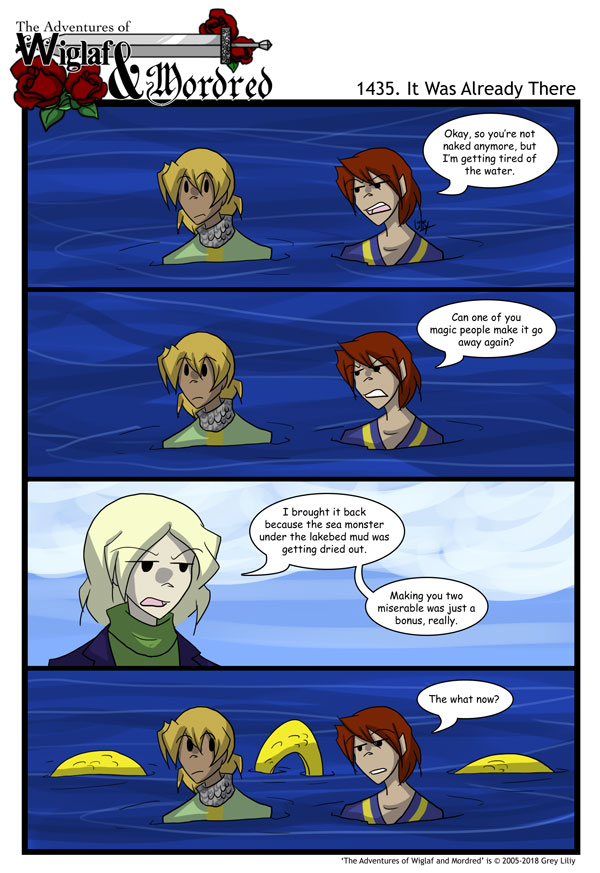 It Was Already There

Something had to be guarding that sword to start with. It just wasn’t very good at it’s job when the sword escaped on its own.

Also I kinda love how casual Azrael’s started speaking. It’s like the more done with everything he is the less formally he speaks. He used to use all sorts of long sentences and dramatic language. Now he’s just bitter. Ha ha ha.

Edit: Friday’s WaM’ll be up late. I was having a great freaking day and decided to keep it that way by chilling with some games and going to bed early. Feels kinda nice to have a strip be late because I was in a good mood for a change. Ha ha. Thanks, guys!

Yay! Wiglaf so needed a sea monster. (I can totally hear him as Beowulf: “Oh, I lost the swimming contest because I was busy killing every sea monster in the fjord.”)
Also: who knew Boss cared about animals?

Well, that’s probably why he is canibal. It’s way not to hurt animals without need for all that veggies. :D

And…..how long as this sea monster underneath Lake and Camlann been there? And because I’m assuming a really long time, how stupidly magical is it now simply from being in proximity to Lake for however long it was?

(I may have to make another attempt at “die laughing” if it ends up talking and actually being really nice and friendly. Just to play with Boss’ head AGAIN.)