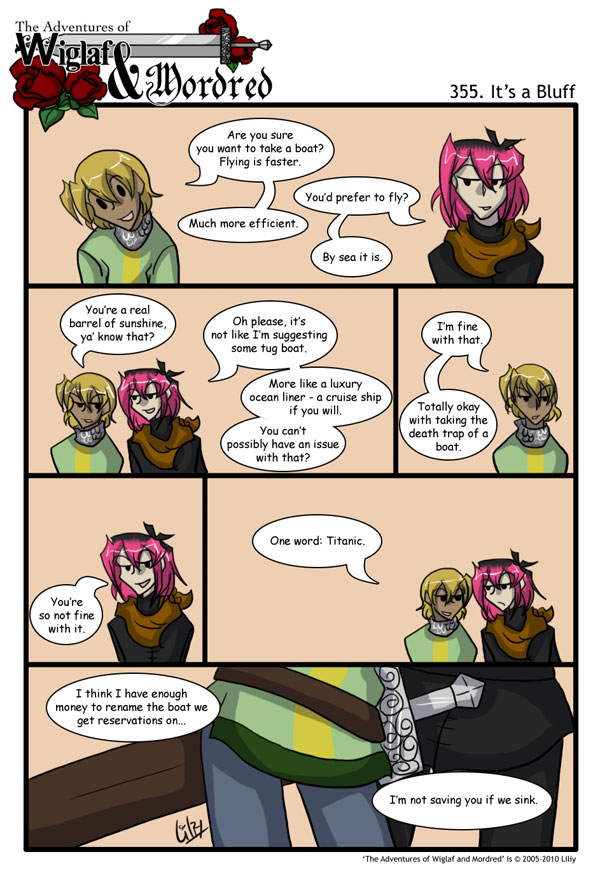 I am ridiculously happy with Mordred’s hair in the first panel.

On a semi-comic related note, I used to love watching Titanic documentaries. I couldn’t stop watching them even though some of the fish that appeared in them used to give me nightmares. I’m still scared of (most) fish to this day. They’re creepy and I hate them. But that’s not the point – I loved the Titanic. Heck, my grandmother bought me a little glass replica of the Heart of the Ocean from the Cameron Movie. It’s sitting on my desk as I type – wore it the other day in fact. My favorite scene in Ghostbusters 2? The Titanic pulling up to dock (“Better late than never.”) Where was I going with this? Oh yeah – Love that freaking boat. The Grand staircase? *whistle* Most gorgeous piece of architecture ever on a boat. Couldn’t help but bring it up.

So of course Wiglaf must name drop it. It’s a rule.

But in other WaM news – I was checking my incoming links (yay!) and discovered a couple people (Edit: Ozbourne & Katrika) were roleplaying Hagen & Gawain on TvTropes. This made me inexplicably giddy….especially the avatar they were using for Gawain:

You can’t tell me that doesn’t rule. Because it does. Which segue ways into one more thing – Thank-you all for reading WaM! I really don’t say that enough. There are literally thousands of comics out there and you’re all wasting your time on mine. *hugs* Love you all!

Lol. I like Mordreds sense of humor since he is most likely to do it.

The look on WIglaf’s face in the first panel entertains me so much for some reason.
And Gawain really is the hottest zombie for sure! ^_^

Ha ha, indeed, that roleplaying credit and avatar does rule. :D Documentaries on the Titanic are also cool, as you can see great underwater footage.

Maybe Wiglaf and Mordred can forget about the fear of sinking by helping themselves to the cruise ship’s big buffet table. XD

Are they going via the Panama Canal, rounding the Horn, or off-loading in Northern South America and doing the last part over-land? Rounding the Horn gets them closer to ice bergs!!!! Had a friend that grew up in Peru in the Jungles, giant Anaconda’s and Piranha are found there for sure. She is the only person I know with a Piranha bite.

You discovered our rp! I was the one who made both the avatars…heh. This made my day!

Yeah. XD I was like “Why are they role-playing and not editing the trope pages!?”

I don’t know what happened..
but the comic, over the last several strips (few weeks maybe? ) has suddenly become like.. fifteen times better.
and I read the entire archives more than once, so I did like it to begin with.
just thought you should know. :D Today’s comic even made me lol. (not an easy thing to do. ♥)
yaaaay keep up the good work plz you’re amazinngg. =D!!!

And just so ya know, we’re planning on rping Wiglaf and Mordred themselves soon. :happy:

Oh, how fun that our RP got noticed!

Well, out of all those thousands of comics out there, this is the one I always check and always makes me laugh. Thanks for making such a great comic! :lol:

Woah, I haven’t read this comic in a while, and then I see this comic advertised upon another comic, and I was like…
o_O
WHY DOES MORDRED HAVE PINK HAIR?!?

I’ll have to read this again, I love this comic so much! Can’t believe I didn’t remember this one when I got a new computer! I feel like such a dolt! I shoulda transferred all my bookmarks T3T
Anyways, awesome comic is awesome :3