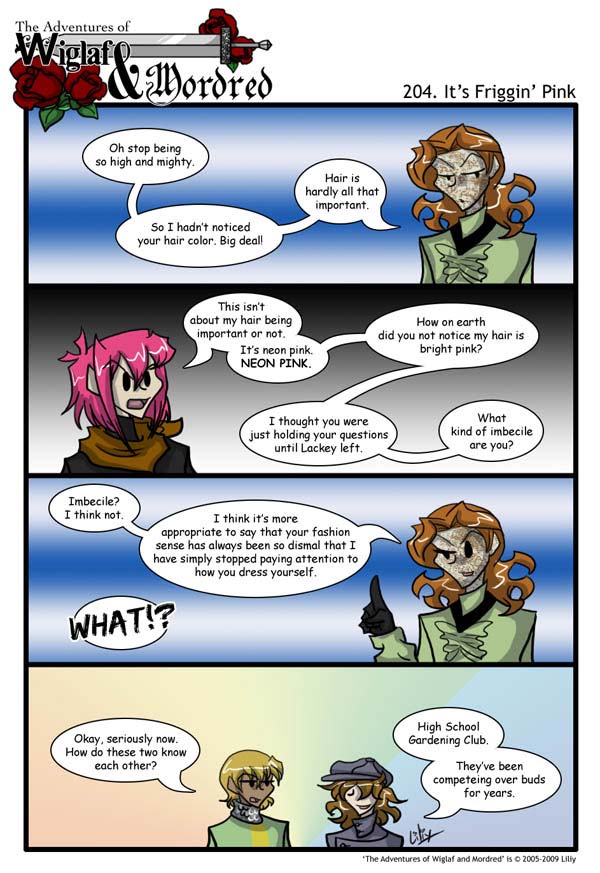 Ha ha. Color Friday night…maybe. But for once I have a good excuse for it being late. Some family dropped in as a surprise and we’ve been hanging with them. Probably all weekend, actually. So Sunday might be late too – but it should still be up Sunday. :cool:

Hrm. I should probably be talking about the comic or something…but everytime I come here to do so I can’t stop thinking about other things.

Like today, it would be Megatron. Didn’t used to like him, but after watching Transformers: Animated and reading Megatron Origin I can’t seem to get enough of him.

Transformers made giant robots sexy. I hold to that.

“Minna no Peace” by Afromania

Ha ha ha. XD Lancelot and Mordred seem to be made for one another. *cough*

Though I wouldn’t mind seeing it happen XD

I’m sure thers a joke somewhere in in Drivers last line… I’m just not sure where.

I thought of that but mordred seems too apathetic to fight over friends … If he has any at all.

*Chuckling madly.* How did you come up with that one?

I must be reading too many Spider-Man comics lately, because Mordred is reminding me of Doc Ock in his overwrought reactions to any perceived slight. XD

O_o …That pun…. It’s horrible, but I almost snorted orange soda out my nose.

it took me at least 15 times to read that last line to get it, and when i did i felt like an idiot for not getting it sooner.
I like how that last panel is all rainbowey. :happy: :D

I need to see Driver hook up with Lancelot just for the fact that he has a crush on her AND knows she is a woman!

Also you got me hooked. http://yasuo-michi.mybrute.com