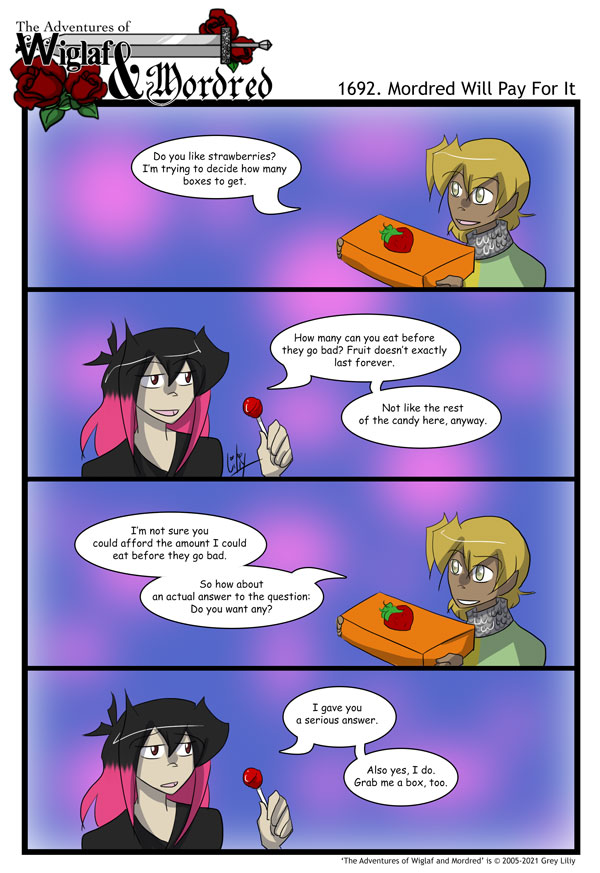 Mordred Will Pay For It

I’m still not over my dad buying two boxes of chocolate covered strawberries. XD My whole family enjoyed them all weekend. Lol.

Though I’m also partial to lolly pops. Which I have a ton of at work, so I’m looking forward to those tomorrow. :D

(A nice gentleman gives the office a box of them once a semester. XD)

Edit: I might need to officially make WaM’s update schedule “Every other update” at the rate I’m going. Lol. Anywhoo. No strip today…not because anything bad happened, but because I didn’t know what to draw. Funny enough, even on days when I’m too exhausted/out of it to draw, I still have some idea of what I want to do (and I end up drawing it for the next update) but today? Total blank. I have made the decision not to force updates when I’ve got writer’s block and I’m going to stick to that. I’d rather be happy with the strip than force something mediocre. (Might have said that before. I made this decision a while ago. XD;). With that…I’m going to think about what will happen next on their vacation and I’ll see you guys on Friday!