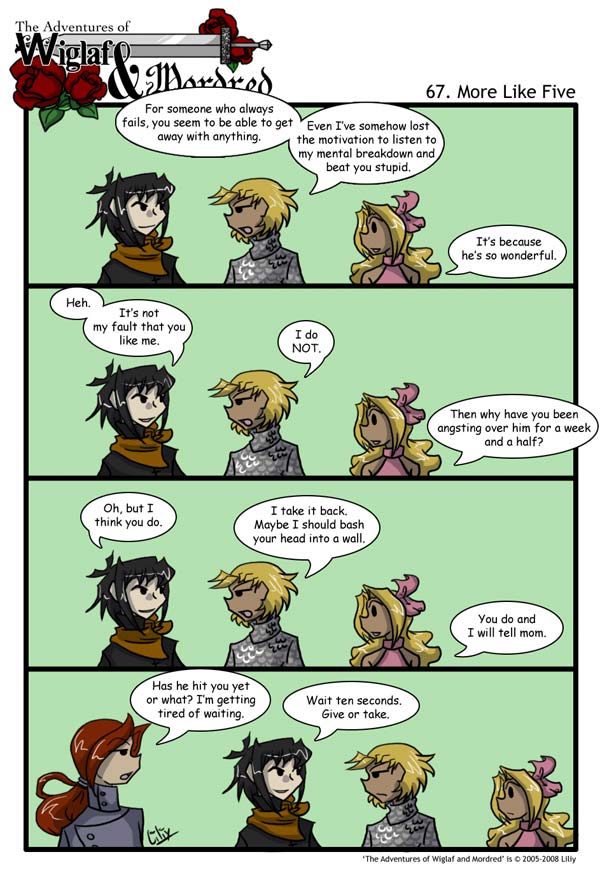 If you’re curious who the red-head is in the last panel, he’s Azrael. I was hoping the hair would give him away, but it is his first time in color. Azrael almost wasn’t a red-head since the Valkyrie Sisters are sporting that orange-ish red that Driver shares, but I decided to keep it. So now we’ve got a more auburn red-head among the cast.

Not much else to say on this one other than I’m kinda digging Wiglaf’s short hair. Though it’s probably not poofy enough; Wiglaf was sporting some serious waves with long hair, so short it should just poof everywhere since it lost all the weight. But that was a little too much, so I compromised and had his bangs pop up instead. :D

And that’s your tidbit of insider information for the day. *Goes back to listening to Diary of Jane on loop*

First appearance of Azrael. I’m not sure he’s the best man to be assisting Mordred; he’s kind of reckless and could mess things up.

Wiglaf could pulverize Azrael, no question. What is this? Some sort of test Mordred’s conducting? *Shudders.* Mordred looks creepy with a sleazy grin on his face like that.

So Mordred confided in his brother enough to get Arthur to lend Azrael. Interesting.

>_< Wiglaf looks more feminine to me with this short hair thing he has going on, now. I keep seeing a phantom red hibiscus flower at his temple. And Blackford’s def. correct about Azrael. That man has no good track record on report.

XD I love the last panel.

Mordred looks so pleased with himself at the prospect of provoking Wiglaf into hitting him and thereby beaten up (well, in a fight) with Azrael.

*a regular reader, rereading everything*

That said, this is one of my fav webcomics. Ahaha. Thank you!