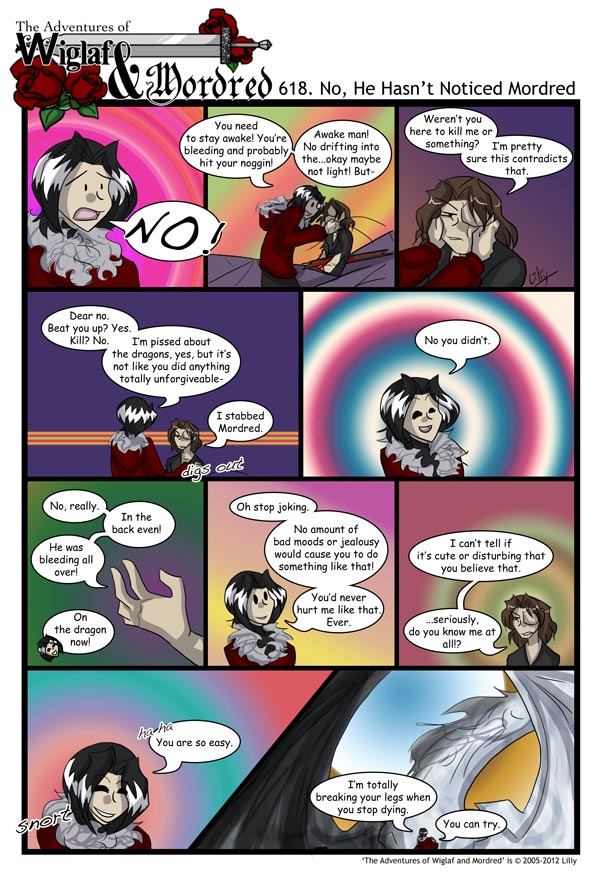 No, He Hasn’t Noticed Mordred

Whoo! I actually made the Friday update! Barely.

Who says Friday the 13th is unlucky? :D

That wraps up these two, for now. We’ll see final consequences later in the next arc. All that’s left is a little wrap up with Mordred & Driver and them, and then…next Volume! Which should involve Ben and Azrael and a new Character! :D

And sorry stuff keeps getting in the way. I’m working really hard to get a book out by April, so it might take priority over WaM.

“Happiness is a Warm Gun” by The Beatles

‘All that’s left is a little wrap up with Mordred & Driver’
I thought it was with Mordred and Wiglaf? Or shall he remain missing for a while?

I will say…that it was not a typo. :D

I so want to see Arthur’s face if he ever finds out he wasn’t lying about stabbing Mordred. i mean he shouldn’t be that far from them

Arthur is so adorable~ I love him so much~! *huggles*

…Is it wrong of me to want to see Sedrick with broken legs because I would find that ridiculously attractive?… Heh ^)^; I love Arthor’s denial. No, you wouldn’t do that to me. I don’t believe it and will now dismiss all of your own reiterations to convince me. Giggle.

…i may be wrong but i don’t think Arthur is in denial. he just is giving his friend a helpful hint to drop the subject and pretend that he was joking. or else.or the”you are so easy” commit he made might suggest that he knows and will be braking Sedrick leg for it. but no hard feelings. just don’t mess with his brother obsession again

Taking into consideration Arthur has proven he’s an amazing good liar (see the whole “Gustav had a baby?” incident), I’m gonna have to go with your theory. Arthur is telling Sedrick to shut up now. X3

Agreed on all counts.

Arthur is funny as he struggles to stay in denial about Sedrick’s wrongdoing. He even has to threaten Sedrick just to bottle up his anger over all the destruction he caused. This may qualify as a warning never to remind him of the fact that Sedrick attacked Mordred. It may be the only way the two of them can reconcile. XD