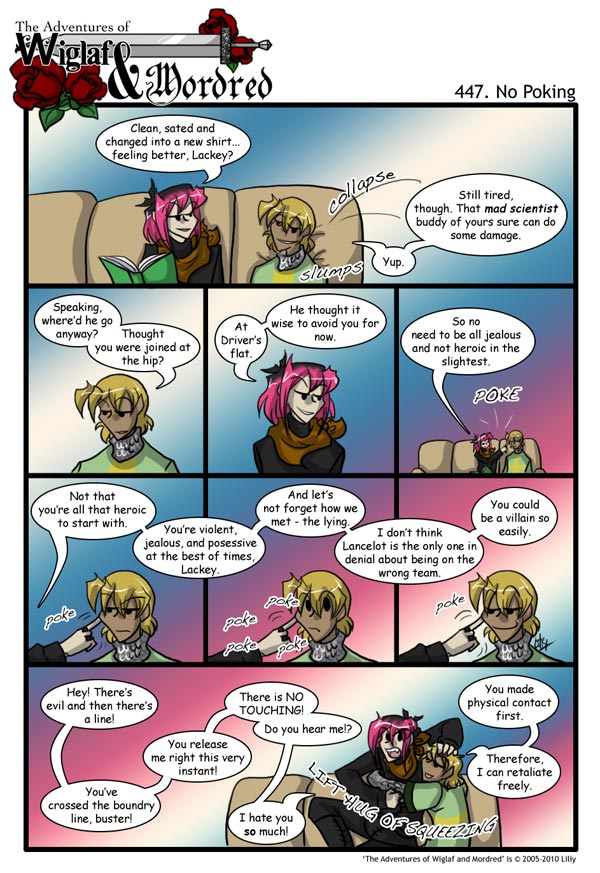 I wanted to draw something fluffy and that lived up to the WaM tagline of “All the Teasing, None of the Payoff.” Though you may have gotten some payoff with the hugging.

Whatever. It’s been a while since we had just these two. I mean…the strip is named after them. XD

I should be sleeping.

*wakes up for a minute* …cute comic is cute. <3 I love these two. Really, Mordred, you got in his personal bubble, you should've seen this coming. *goes back to sleep*

Mordred, Mordred, Mordred, if you didn’t antaganize Wiglaf like you do you wouldn’t get hugged…and I love Wiglaf’s retaliation! ^(=^.^=)^…the funny thing is that me and my roommate noticed a resemblence in the title and the page for today to our life, i have some weird love of poking people, though unlike Mordred, i like retaliation! makes things more fun!

That SMIRK! OMG that smirk! *swoons* I love Wiglaf more and more every day, I swear I do.

Ha ha, those two are at it again. Wiglaf teasing Mordred at the end is great for a laugh. It’s very funny how casually he retaliates. And Mordred’s overreaction is hilarious as always. XD Good job with all of the vivid expressions, Liliy.

Apparently Mordred’s trying to repeat his old routine of gleefully undermining Wiglaf’s heroic image, but he chose the wrong time and it backfired big time. XD Hey Liliy, will Mordred have more opportunities to try to mock Wiglaf and his heroic pretensions?

omg the smirk… look at the smiiiiirk. Oh I’m eating it up. I really am. So gushy. :happy:

Mordred IS right you know,
our darling smirky Wiggy IS violent, jealous, and possessive~!! :$ but adding physical contact and words about denial and teams~!!! :D My mind flew down the gutter for a minute!! (picks up brain) I need to get this thing dry-cleaned. :sly:
“All the Teasing, None of the Payoff.” yeah, that really does sum it up!!! :lol2:
LOVE THIS! :love:

There’s no flashing adults-only warnings here, I don’t think you’re going to get to see any “payoff” even if it’s in the plot.

Weird. I didn’t see that until you just mentioned it. Instead the other side of the specturm popped up in my head.

Wiglaf is hugging on a child version of mordred on his lap. Mordred is wearing a drak brown bib and struggling against Wiglaf. He wants to eat by himself like all children but Wiglaf is trying to keep him still in the attempt to get him to not make a mess of his food.

Driver is standing by giving the two a disapproving look while stating that she can easily do this without the mess.

*blushes* They would make a great couple, Wiglaf is already possessive over Mordred and doesn’t like when people try to take his place. Mordred still keeps Wiglaf around when he could have just have his dad or someone powerful to finish him off, so He has to care for him, right? Anyways that probably just me think out loud but Mordred will probably come out of the closet soon x_x

Can we bring the focus back to them? I missed their teasing.

Love the evil smirk in the 7th panel.

I know I’m a dead man for even suggesting this (because Mordred will hire Azrael to go after me) but those two make SUCH the cute couple. ^^

it’s been suggested so many times by others (myself included) that i do think you’re safe (=^.^=)

I’m due to re-read through the archives to find it sometime before the year is out. When I go rereading I’ll try to make note of the time that an extra or a character had mistaken W&M for a romantic couple before.
I could be misremembering but I’m pretty sure it has been done.

I know Security did it the second time we met him. Other than that, I think they’ve just been teased by Driver…

Yay, poking is the best, oh no wait… retalliation is even better. Gosh, I’ve missed them a lot!

I can’t really add to whats already been said BUT I’m glad they are back to their regular shenanigans.

On a totally different topic, I love the idea of an orb of bliss but was disappointed when I realized it was not actually an orb. :(

I admit, evil was not the first thing “denial about teams” brought to mind. *insanegiggling*

believe you me, you ain’t the only one

…Oh my. This is adorable. And I don’t want to ruin that. But I can think of some great sex jokes stemming from this. I’m sorry. It’s a very awesome strip.

My yaoi fangirl keeps kicking in. Ah ha. I sat here and was like “Kiss him kiss him.” xD
I love Wiglaf and Mordred they’d be cute together.

Most of the hard-H stuff is the province of doujinshi in Japanese cartooning and its stylistically derived works. Why don’t you do it?

Because I’m no good at drawing, or I probably would. Ha ha.

I just realized, this is the second time Wiglaf’s used a hug as a way to torment Mordred, the first being here-http://liliy.net/wam/archive/admit-it-you-saw-this-coming/
He likes to hug people(or at least Mordred) doesn’t he?

This one is way too cute!