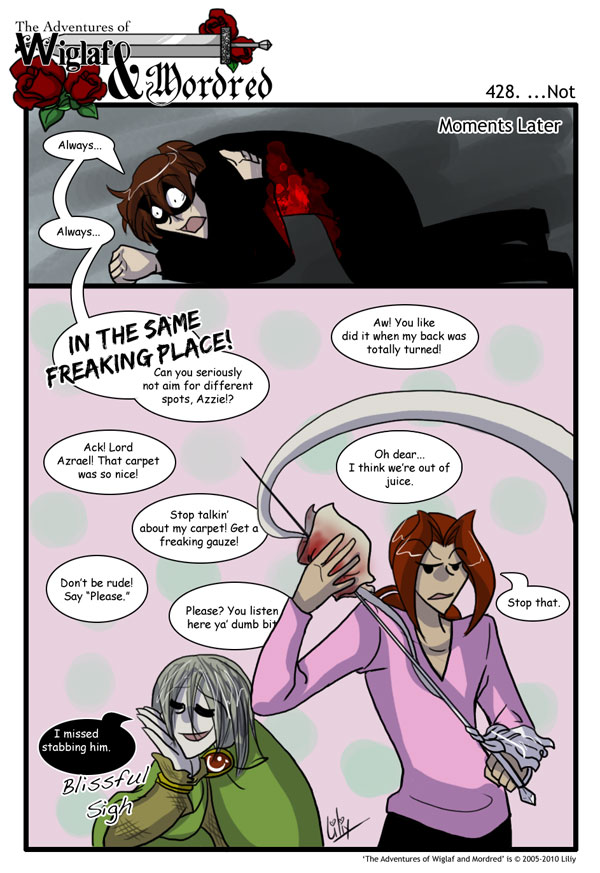 Seriously. Grace is a jerk.

And Gen’s an idiot. XD

Um. As for senseless rambling…I’ve actually been busy. September has been like super busy. XD I can’t remember the last time I was running around this much. And it’s all been little stuff adding up. Like this weekend I’ll be at a dress rehearsal for an orchestra performance on Sunday & Saturday I’m actually hanging out with a friend in person (gasp! I know…people? In person? Just did that with a different friend all last week on va~cay~ XD On a role baby~).

Fun stuff that. Sadly though I’ve spent what free time I’ve had reading fanfiction. And not writing it. My poor poor neglected fanfics…

“It’s Gotta Be You” by The Backstreet Boys

Grace, you are an awful jerk.
…why are you so awesome?! Seriously, why? There is no logical reason why I should love him, but I do. XD
Gen is a very silly man, thinking he can get away with trying to turn Azzie out. I just love that one of the sisters (Brynhildr? I know Svafa’s occupied with the fact she missed it) is more concerned about the carpet. XD Poor Gen…

I, for one, approve of her villains actually doing awful, violent and criminal things. There’s only so much that telling about it can do if we don’t see them racking up the body count and property damage decimal places.
Sadly we have word of goddess about her reluctance to really kill folks in the comic but at least we’re getting blood.

good point. they are actual villains instead of informed villains… they are NOT nice people who just happen to be a part of “team evil”

Rule #1 about being a character so generic that Generic is your name: If a superhero/villain/someone who’s regularly called something like “The Angel of Death” or “The Devil of ______” decides they want to do something at a small expense to you, like say stay at your house, you freaking let them do it.

Luckily, as Gen actually has a name and relation to main characters, violation of rule 1 only means horrible, agonizing pain.

*Snerk* Totally saw this coming. Poor gen… Poor, poor, foolish, Gen… But ah, he’ll be fine, I’m sure. Nothing he hasn’t had happen before by the sounds of it!

Woo Hoo!
Azzie’s run of seemingly bad luck these past few strips had me seeing a downward spiral and I was worried for him.
But clearly Azzie’s still on top of his game and after this I am filled with happy emotions and confident that everything’s gonna be OK!

Geeze Gen, what did you think would happen if you tried to kick out a sword wielding nut-job who stabs things he gets angry with(or because he feels like it). Silly silly Gen.

(Unrelated to current page.) Hey, Liliy! I’ve a challenge for you: eventually include an example of each one of these situational terms in WAM: http://www.afar.com/blog/2010/09/10-words-every-traveler-should-know/ .
So far, you have examples of cafune, torschlusspanik, ilunga, and maybe mamihlapinatapei. I bet you could find a way to work the other six into your storylines!

You’d think that Gen would have known that would happen. Now he’s ruined the carpet!

At least Azzie didn’t castrate him, so maybe he will get lucky and one of the Valkyries will nurse him back to health. =D

HAHAHAHAHAHAHA Right in the gut!! Go Azzie!! Grace you must love stabbing him does that mean your trying to cheat on Azzie? Azzie looks peeved :love: :$ :curious: :D :P :love: :lol2: :)

Poor Gen, he really should have seen that coming, but I still feel for the guy.

And Grace, you are such a little ghostly masochist. :P

I know right? It was nice carpet.

Was it named “Couch”?

…we’re not going there.