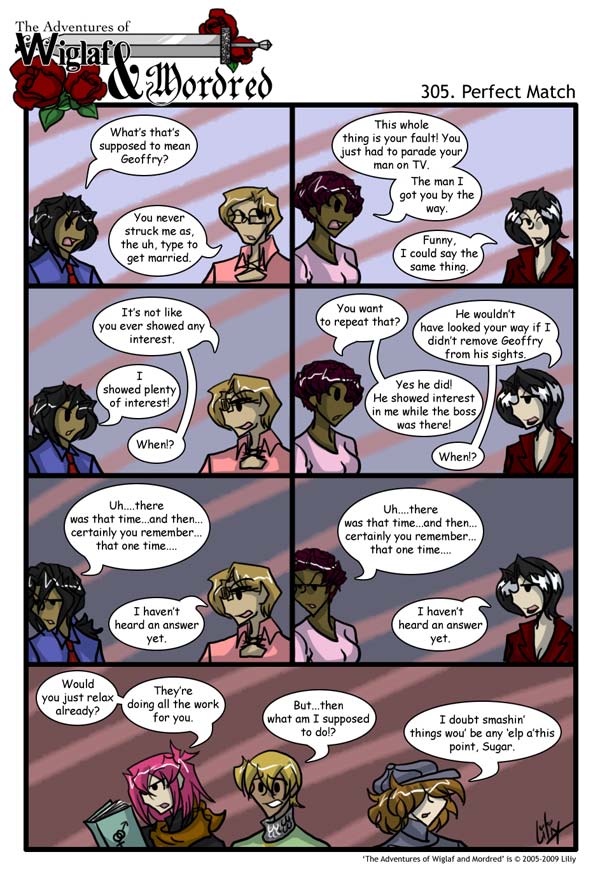 80% of today’s dialogue was brought to you by my bro (Ookami no Kishi). :D

Ah~ So tired. XD I spent most of this after noon on my Milk In the Pantry Secret Santa gift. I think it turned out alright.

And Wiglaf needs something to do already. Clearly Mordred found a book, but what’s a hero to do?

The Princess and the Frog.

Go see it. Like now. It’s amazing and it made me ridiculously happy to see another broadway musical style Disney 2D Animated feature. It’s been far too long. Tiana & Naveen are one of the most adorable couples I’ve seen in years and Keith David is the most awesome Shadow Man. Ever. *hugs Goliath’s Voice Actor*

“Ma Belle Evangeline” – Ray, The Princess and the Frog

*Breaks down laughing hard.* Someone ought to revoke her security guard privileges.

Oh yeah. She’s the one who assisted the kidnapping of the boss XD

haha I like the sketch, I finally know what Mordred is always reading. Also, I luff wiglaf

What is he reading?

So, Mordred will most likely save both marriages, that way he won’t get bothered by his sister a lot.

Haha, it’s hilarious that Viola got Geoffry for Janus, probably to clear away competition for Horatio’s attention. And she can’t even admit that Horatio was never within her reach until Geoffry was out of the picture. XD

I love how Mordred found a book and is able to read in the middle of all the commotion. XD

This is so BRILLIANT! XD

Just wait a lil while… Before you know it diplomacy will break down!

matchs made in heaven… well more like hell in some views but still :$
….
is Mordred reading a romance novel in the middle of all this?

Aw, poor Wiglaf. He wanted to be useful too!

Anyway, I second Liliy’s advice: go see The Princess and the Frog, you won’t regret it!

Haha, Horatio and Viola are so cute…^_^

YES, go see The Princess and the Frog. I saw it with my friends yesterday, and we LOVED it. =D

Looks like they were made for each other. Geoffrey seems rather observant about Horatio’s… tendencies, though… XD

Today’s post is genius! Amazing parallel dialogue!Did you just happen while writing or was this planned to start out with?