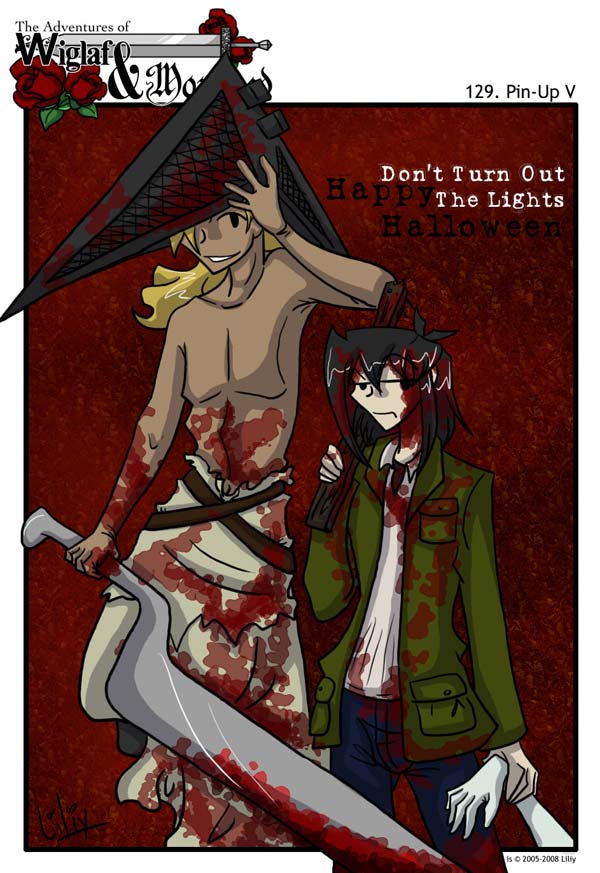 For the occassion, Mordred and Wiglaf have dressed up as James and Pyramid Head from Silent Hill (as that’s the only horror film I think I’ve watched…) and it worked out much better than I thought. Pyramid Head stalks James…Wiglaf stalks Mordred…match made in heaven. XD

Though, I didn’t take it all from Silent Hill 2 – because let’s face it, that man’s latest incarnation in Silent Hill V is hot. Like really hot. Look at him. That shouldn’t be as hot as it is; it really, really shouldn’t.

Anyway, lots of ideas for these two to dress up as – but as I said, Silent Hill was the last horror related thing I watched and well. I got a whee bit obsessed with Pyramid Head. Just a tad. Smidgen.

Admit it, Wiglaf looks hot dressed up in a bloody butcher’s apron. :P

And, since I love reader participation time (it makes me sooo happy XD):

Who’s hand is Mordred holding and what happened to her/him?

Maybe he got tired of Maria being useless and just knocked her unconscious (maybe Driver in this case?). Also, very awesome and funny XD. I’m buying a PS3 this Christmas, I wanna play SH 5!

Ha ha, I don’t have one either. XD Actually, I’ve never played any of the SH games…heh. Just watched the movie and cutscenes from the games. XD

Hurray for Silent Hill! :D Those two are a little too perfect as Pyramid Head and James. XD

It’s Driver. She was dressed up as one of the nurses and tripped. Wiglaf took the chance to be rid of her by stabbing her with the Great Knife, removing some of his competition for Mordred’s affection. Mordred may or may not have noticed. XD

“Mordred may or may not have noticed.”

Self-control is the only thing that kept me from bursting out into a laughing fit while sitting at my desk at work.

*Frowns.* My mind is getting stuck on “Alone in the Dark” instead of “Silent Hill,” for some reason. *Shakes head.*

Mordred has Brat by the wrist. He bashed her in the head with the board, and figures that the most likely way to keep Wiglaf from noticing is by dragging her around like something precious.

O_o Either that or it’s Arthur…’s hand. The setting for “Wiglaf and Mordred Do Silent Hill” is Arthur’s mansion and grounds, and Arthur has biolocks on some of the locked doors, so Mordred had to harvest Arthur’s hand in order to get anywhere important.

Call me crazy but I think Sedrick might be a bit peeved should Arthur’s hand be lobbed off…heh. Actually, that’s sort of amusing in itself – Sedrick chasing down Mordred to get back what belongs to him. :wow:

For the record (and completely off topic from anything else) Pyramid Head is now no longer Pyramid Head Head, he’s now turned into more of a Pyramid Upper-Half, although I suppose that isn’t as chatchy as Pyramid Head. Should also be noted that I wouldn’t be seen dead with a PS3 because to actually be able to afford one I would need to sell my soul and at least 1 limb. So I’ll just stick with Left 4 Dead and House of the Dead! Woooooo! :love:

It’s probably Janus that Mordred is holding by the hand. I’ll bet Janus was stalking Mordred again trying to show her sisterly love to him (or torment him, whatever) and was hiding in the bushes, but Mordred heard her coming. So he probably yelled to Wiglaf that there was a snake in the bush, and Wiglaf started hacking away wildly at the bush with his blade, a la Hamlet slaying Polonius behind the curtain. So Wiglaf cut Janus down, and Mordred is now disposing of the evidence to cover up his role.

Ah Hamelt. I only like that play because it’s the first time my favorite character DIDN’T die. Which is a rare occurrence for me. *hugs Horatio*

Yay for Pyramid Head! Even though I’ve never seen or played Silent Hill, I’ve heard of Pyramid Head before(and seen fanart) so I have a slight, tiny idea of who he is. :lol: But still, really amusing piece.^^ Definatly one that should be put on dA as well.

And I second that motion! It is so Brat, but mainly because she’s the only character this comic doesn’t need. Everyone else serves a very important part. :lol2:

The hand is Driver’s. She saw Mordred naked and died. Happy. Mordred decided to make the most of it and use her as a Halloween prop before chucking the body and forcing Wiglaf to drive.

Is there some particular reason Wiglaf keeps ending up as the villain in these sorts of pin ups? xD