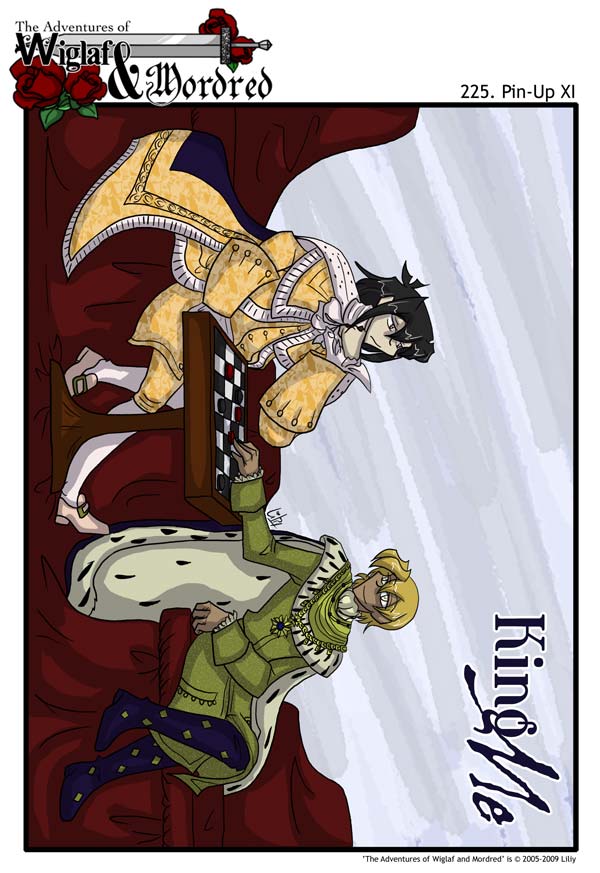 You can see the full sized version of WAM (in it’s correct orientation) in my devaintart gallery HERE!

I love how this turned out. *ahem*

I’ve been obsessed with Axis Powers Hetalia (Anime where the Countries of the World are represented by over-sterotyped people who act out historical events. It’s hilarious.) lately, and well, it’s put me in a historical mood.

So, I drew Mordred as King George III and Wiglaf as King Gustav III. They both ruled the United Kingdom and Sweden repsectively; their reigns overlapped for a few years.

Anyway, the point is I wanted to do a horrible pun. If you haven’t spotted it; than clearly you didn’t recognize my miserable excuse for a checker’s board. :D

“I Just Can’t Wait To Be King” -The Lion King

Sparkly. XD Spectacular pun, by the way; it’s not often you get to pull of a multi-layered one. XD

Indeed, I loved the multi-layered pun. It was lovely. As is this page. lovely work.

In the game of checkers all the pieces, red & black, are on the same colored tiles (traditionally black). Some of your pieces are the wrong colors.

You could be going for a different game, but that’s what it seems at first blush.

“My miserable excuse for a checker’s board.” :P

You love Hetalia too! Whee! I didn’t know the anime was out. *runs off to watch*

Anyway, the pinup. I love the colors. Everything looks so shiny. *_* The pun was fun too, and I got it right away. XD

On another note, I never noticed that Wiglaf’s eyes were that color. Hm.

I love the artwork here; it’s very elegant. It kind of reminds me of stylized portraits or elaborately designed playing cards and tarot cards. You drew the mountainous background and the cloudy sky well. What gave you the idea for that background?

And that’s a perfect pun; I got it right away. :D

I can see Mordred having an outfit like that in his closet.

(I just want to make sure I got the pun right, and help people who don’t get the pun.)

They’re dressed as Kings playing Checkers. A move in checkers is the classic “King me” – so double pun. :D

and someone can only say “king me” if the player’s color go to the opponent’s side.

so, who is red and who is black?

you know i just realized that when ever you draw Wiglaf with actuall eyes instead of just black dots, he seems a lot more mature or somthin. idk he just sets off a cooler mood. anyway looooovvvveee the whole thing!! oh and i think that Dappled, the fic. you wrote on fanfiction.net. should be updated. :lol2: i keep rereading it…….and it was how i found wam. :love:

I want this as my desktop background.