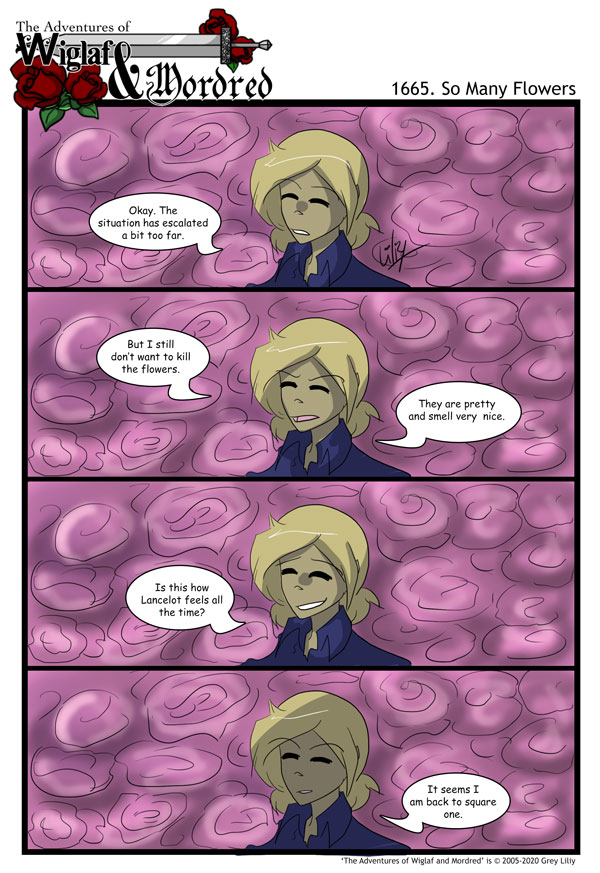 Would you kill the flowers? Would you?

Actually most wouldn’t get the chance because those flowers would have killed you at this point according to Lancelot’s mad scientist plan. *cough*

In other news. I’m beat. I spent the past two days working alone because one coworker had an emergency and will be gone all week and the other had to be absent for a scheduled thing. So uh. That would have been fine (it meant everything was quiet) but I had to sit at the front desk. Which I hate. :D It’s stressful and I don’t like it. Lol. I know that sounds whiny but I really, really don’t like sitting at other people’s desks. It’s their personal space. So many things I don’t want to touch or knock out of place or disturb. xd

Anywhoo. Enjoy the strip and I’m gonna go pass out.

Edit: THE WEEK IS OVER. Lord. That was a long work week. Thursday & Friday ended up being aggravating in their own ways (obviously can’t get into it but it was frustrating) and I’m just. I’m watching G.I. Joe cartoons the rest of the night. I need to decompress. I hope next week is better and I’ll see you on Sunday with a new strip. *lies on side*

I would have had the flowers ripped out of me by Wiglaf long before now, if I had a choice. Having something like that growing in my veins would HURT. Never mind the likely death by blood and nutrition loss that a human would have.

It’s true. A regular human would definitely be having problems by now. XD