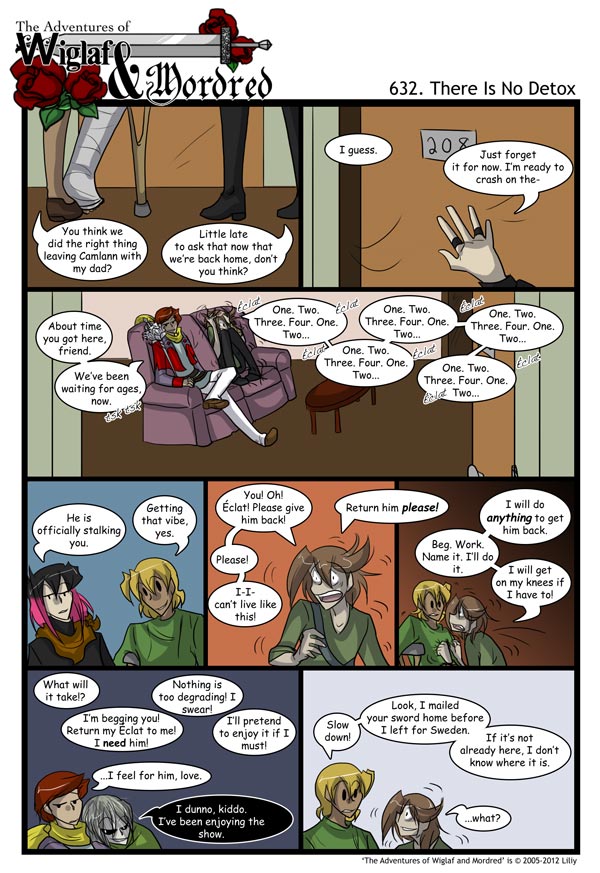 There Is No Detox

Yeah, I wouldn’t want to be Ben right now, either.

Though that is my favorite Azrael drawn to date. <3

Heh. Poor Wiglaf. That Clavicle brace thing under his shirt prevents the wear of Chainmaille. XD *snickers at his misery*

Alright folks! I’m off to Katsucon (as soon as I pack and get some sleep) – so Sunday’s WaM’ll be super late!

I’ll be tweeting occasionally at Katsu, so I might see some of you guys! :D

Edit: By “super late” I meant ‘skipped’. XD WaM’ll be up on Wednesday.

“Cosmic Love” by Florence + The Machine

Oh dear, I think he broke Ben in the last panel. The poor kid.

Eclat is lost in the mail lol

It’s good to see Ben again, even if he has gone a bit crazy. It’s cute, in its own special way.

And everyone starts shipping them.

Awww… Poor Ben. He needs a lot of love. *cuddles* I want one.

When/if Ben gets Eclat back, Eclat could have so much fun with how clingy he is. XD

Wow… X3 Ben and Azzie are so cute, and Grace is such a mean little thing. Is it bad that I love him for that? and Freaking out Ben is ADORABLE… at least as adorable as beaten up Wiglaf.

Also… am I the only one worried about what Eclat might be up to on his lonesome in the mail? How many packages has he turned into man eating monsters? *sighs sadly thinking of it* its so irresponsible. (I know… Wiglaf prolly wrapped him back up in the sealing belts or something… )

Eclat can’t do anything unless his master has physical contact with him, so the Post Office is safe. If he could, Wiglaf would surely have had enough sense to not leave him on his own for even a few seconds. :)

I’m wondering about Mordred, he had started showing dependence on Bliss not that long ago, and now he seems fine. Did his concern for Wiglif help him ‘kick’ the habit/need for Bliss,or is it just that he hasn’t had her for as long as the others that make him ok?

I think his intense anger at what Bliss did to Wiglaf drove Bliss away for the time being, so she’s staying away of her own volition, and the addiction probably hasn’t become strong enough to surmount that anger yet.

sounds about right. I wonder what will happen when she shows up again. Or that lady who seems to collect them. Will he be angry when she tries to take Bliss? He is very possessive about his “possessions” Look at what happened when Wiglaf took Camlen away.

Is it just me, or are Grace and Azrael cuddling on the couch…?

They are, they are indeed.

XD I love you Grace, I just do. I also love withdrawal-mode!Ben XD Liliy, you are still a genius!