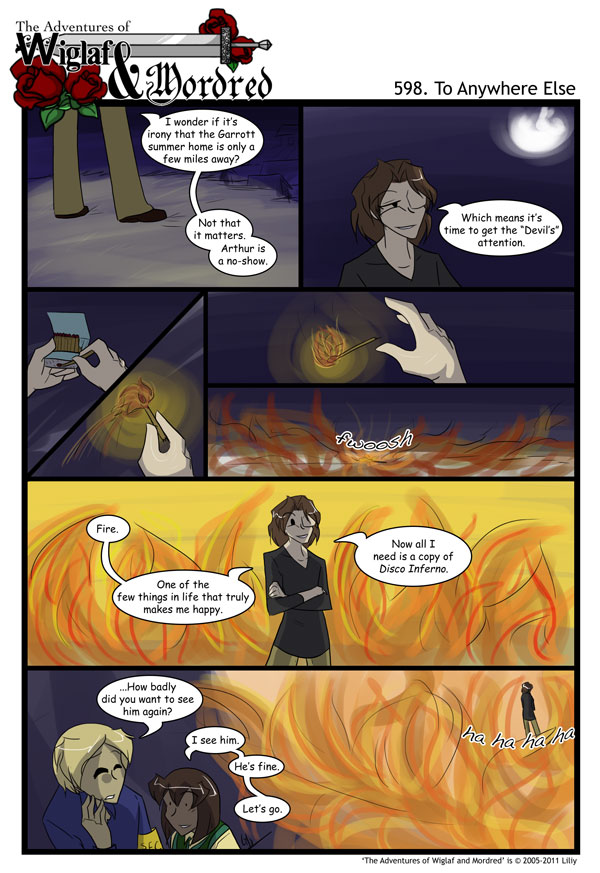 You all know that song rules. :3

But not as much as getting to make a stealth Stable Boy joke. :D

We’re…actually getting closer to the end of this arc than I realized. Expect an epic battle to be poorly drawn in the future! XD *throws confetti*

Also, this year is going by so fast. o_O I can’t believe it’s almost December. But more importantly:

NaNo goes slowly but smoothly. I’m really hyped up about Children of Hephaestus. And if you read my blog you already know these things. :D

“Disco Inferno” by The Trammps

Sedrick is grinning, we should be scared, very, very scared.

I like this one. I didn’t, however, understand much. Like if Sedrick has a point to burning things up, or if he does it for kicks. Or, really, that part about the summer home (though it feels as though I should understand that, somehow).

The Garrotts summer home is near where Wiglaf lives, which is where Mordred is, who Sedrick threatened to kill if Arthur didn’t show up.

And the Devil of Bohuslän. I get it now :) Thank you!

Also, can’t wait to see how the daddies react to having their place burnt down ;D

NOT ALMOST DECEMBER! NOT!!!!! *covers her ears* I can’t hear you! LALALALALALALA!

Sedrick is absolutely ADORABLE in panel seven. I just want to hug him~! *squee* <3

Wait for the flames to die down, though.

Good thing Hnaef decided that a quick look at Sedrick was all he needed before turning around and leaving. XD And I like how you drew the fire.

Disco Inferno scares me more than the Real inferno…

Ohgod now all I can see in my mental eye is Sedrick singing and dancing to Disco Inferno…. XDD

Doesn’t matter if I look at other comics; it’s scenes like thiis that remind me why WaM is my favorite XD Aw home sweet insane hunchback burning things home

Lol I wonder if he wants a copy to play or a copy of Disco inferno to burn?

Are you guys coming up for Christmas?

…as far as I know we are. There’s been some confusion, but I think we’re coming. XD