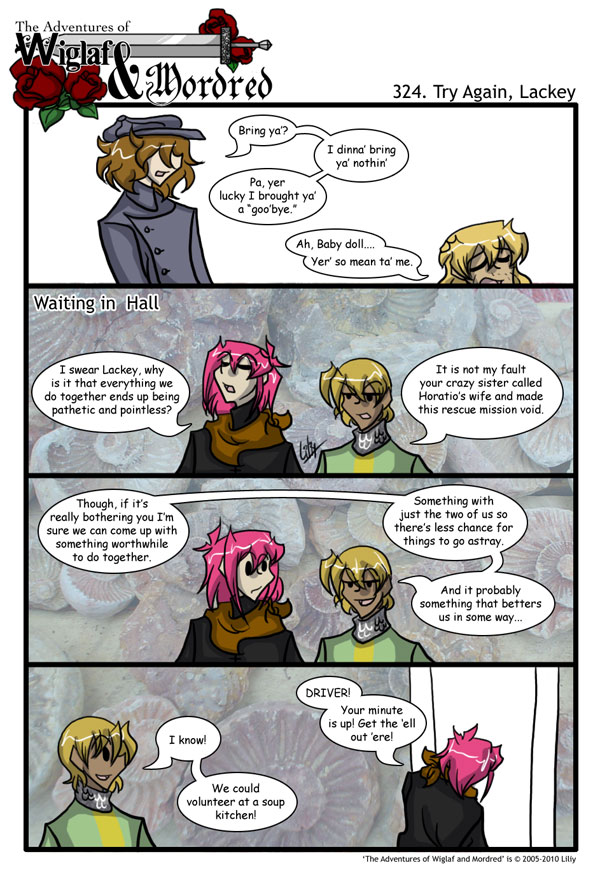 Ah the wrapping up of a Volume. And then we get to move onto something new~ Though, things aren’t quite turning out like I’d hope (Not necessarily a bad thing~) so I think the build up between Azrael & Gawain will be brought to you next volume instead of the end of this one. XD

I blame the muse. I think he’s mad I haven’t given him a name like so many others have theirs…heh.

Also! Last weekend for the Pair-a-Thon! We’ve made it to ten entries! Let’s see how many we can get until the 7th! :D

Oh, and one more thing – Catena. They’ve got an awesome new layout and the comics are back! In color! :D Yay!

“Blue And Yellow” by The Used

Wiglaf is the best. He just is. Nothing more to be said about it.

Waaaaaaait a minute! Is this the first time we’ve gotten to see Mordred from the back? I can’t remember.

Heh heh, I have a feeling that Mordred is even more repulsed by the suggestion of doing good deeds. XD

Mordred shouldn’t view the whole thing as pointless–he’s probably gotten more exercise from this trip than he has in a long time. XD

o.O Whoa, whoa, whoa!! When the heck did you start dropping your ‘h’s like that, Mordred? So much for clear and concise enunciation of your consonants and vowels!!

I finally figured out who Alistair reminds me of. Raven, from Tales of Vesperia. It’s the speech pattern, I think. Your lineart on this page looks really nice, by the way.

They have nice wallpaper outside of the infirmary! Very pretty. =)

A sure sign of the Apocalypse: Mordred begins to adopt his Driver’s hillbilly way of talking (iffin’ tha’s ‘n’ accent, I dun’ know wher’ it’s from.)

I too also love Wiglaf in panel 2