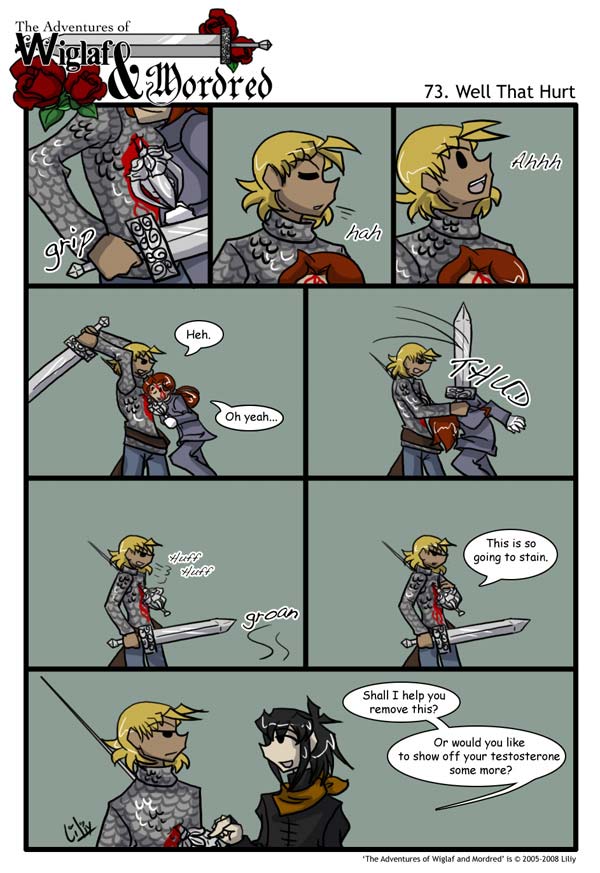 Edit 2: While I’m sure at this point that no one’s reading this anymore, I feel obligated to say what I wanted about this post now that I’m at work and finally awake. XD

This post is an homage to Mordred (the King Arthur one).  Except it’s a rapier instead of a spear – but yes. Mordred was killed in the story by getting stabbed by King Arthur and then pushing his way down the spear to whack King Arthur in the head with his sword, thus also Killing Arthur. That scene’s what made me fall in love with Mordred (again, the King Arthur one) and why I named my own little Mordred after him.

There. Feels good to finally get that out. See you guys tomorrow with a new comic! :D

Nice work! ^_^ I didn’t see that one coming. It’s great! This is another one of my Favorites, like “Hiking Fun”. *Laughing.* *Laughing HARD.*

Oh yeah, like KGJ said, this one is great. Their expressions in panel four are priceless, and Wiglaf’s crushing blow to Azrael’s head is awesome, what with the huge thud and all. Hee hee! Too bad Azrael didn’t anticipate all of Wiglaf’s capabilities.

No, in all seriousness… good stuff. Azrael’s far too cocky for his own good. Otherwise there’s no way he’d let himself stand there.

Mordred once again, having way too much fun. :D

Great job with the color. All the action now comes through clearer than ever!

I like the Arthurian commentary you’ve provided. It adds a nice edge to the comic strip.

I have to respectfully disagree with Mike–I find Wiglaf becoming more and more interesting all the time as the story lines progress.

Wiglaf is to perect to die.
Someone who is perfect can’t die, atleast not in such an imperfect way.
(Thats my rationalization for this page, otherwise my head would start to hurt while I tried to figure out how he survived.)
And I love Mordred, he is so good at ruining Wiglaf’s moments of glory. xD

“Tis’ but a flesh wound.” -Monty Python and the Holy Grail

The first thought in my mind after reading this strip. :lol2:

Hey Wiglaf if ya wnat i can get blood stains ot pretty well! (=^.^=) even outta chainmail

lucky it missed is heart and or lungs or that could’ve been fatal.