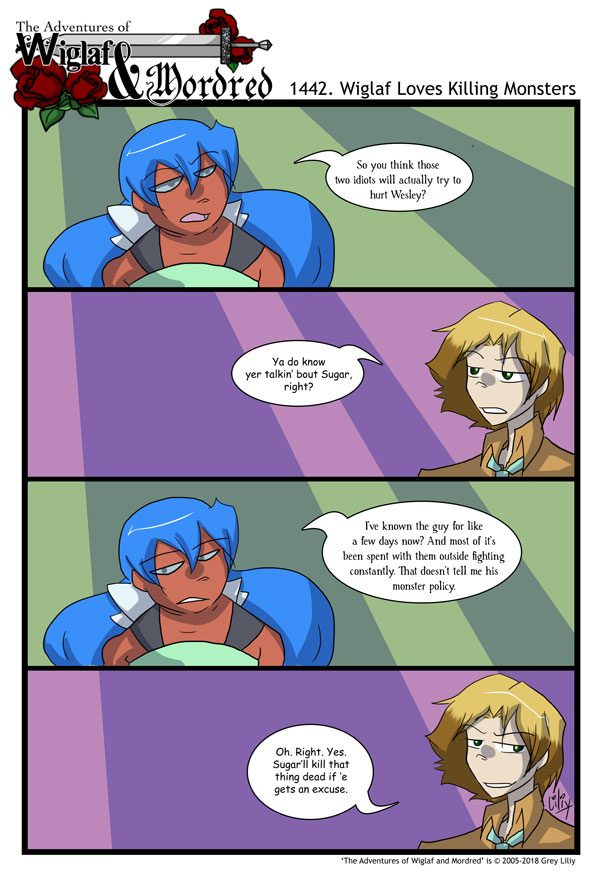 I have shamelessly backdated this post to show it going live on Sunday despite posting it 10 minutes into Monday. I missed my deadline because my art program crashed and my tablet stopped working. I feel no shame. I had to maintain my dating system. Ha ha ha. Hah.

Anyway I know it’s a simple strip but I’m really happy with their faces in this one. Like super happy. That’s my big take away. Whoo.

Edit: I have decided to officially change WaM’s update schedule. For me anyway. I’ve written a long post about it on Patreon you can check out! :D But if you don’t want to read that, the short version is: WaM’ll go live at some point during the 24 hour period that is it’s update day (Wed/Fri/Sun), if it’s not midnight my time, it’ll be late evening. Thank you!  (And on that note, I’ll see you guys later this evening with today’s WaM. XD)

Don’t worry about backdating. Take it this way: who knows what timezone you live in? You have global audience ;) (Greetings from central Europe)

Soo, Wiglaf needs an excuse? That is his “good guy” thing?

On the bright side, if it has no intention of actually hurting anyone, that thing’s probably got him for it’s defense.

It is! As much as Wiglaf adores violence, he knows that randomly beating people up isn’t exactly a good thing to do. :P