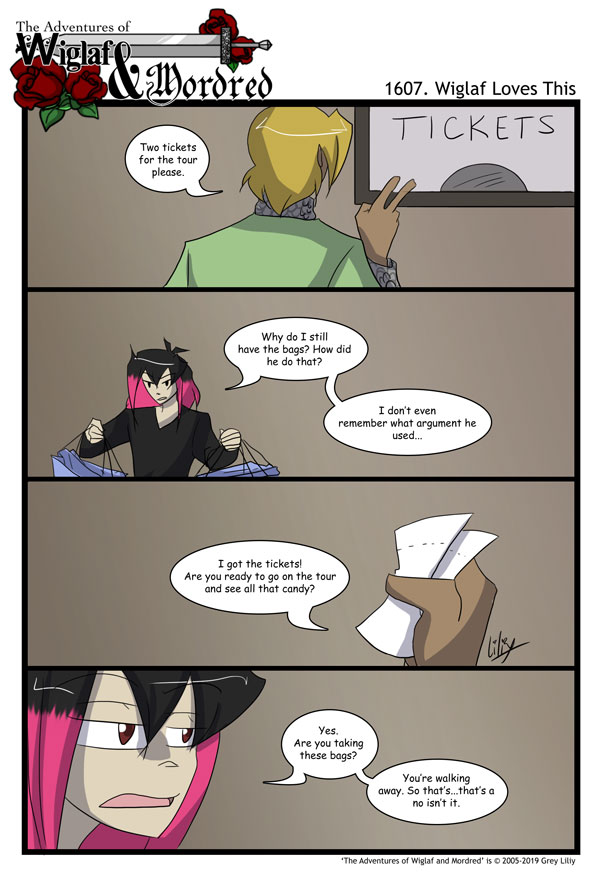 Mordred is humoring him. He’s turned into a pushover in his comfortable life of having friendship.

Otherwise he would have dropped the bags.

(That’s a lie. It has Driver’s present and he’s not THAT evil to leave it behind.)

HAPPY THANKSGIVING. If you celebrate. Otherwise: HAPPY THURSDAY and ignore that this went up an hour late. Lol.

Edit: Decided to make Friday my Thanksgiving Break for WaM. Also because I’m trying to squeeze as many words in as I can for NaNo. And I’ve been informed I’m going jogging with some people Saturday Morning. At like 9:00 a.m. So going to bed early might have to be a thing. XD;; Wish me luck and I’ll see you Sunday!

Edit #2 (On Sunday): So, funny story: D&D Night ended early. I was like “Awesome! I have a little time before I’d normally start drawing” so I like, decided to play a little Stardew Valley since the new update came out (this was a mistake). And lost track of time (which I should have seen coming). And now it’s midnight. And all I’ve drawn is half a panel. And uh. I have work tomorrow. Oops. o-o; This one’s on me. I could have rushed something out, but I want to stop doing that. Bad news: No strip for Sunday. Good news: I’ve started Wednesday’s strip. :D So that’ll definitely be up. Thanks!!!! I hope you all have a good week.