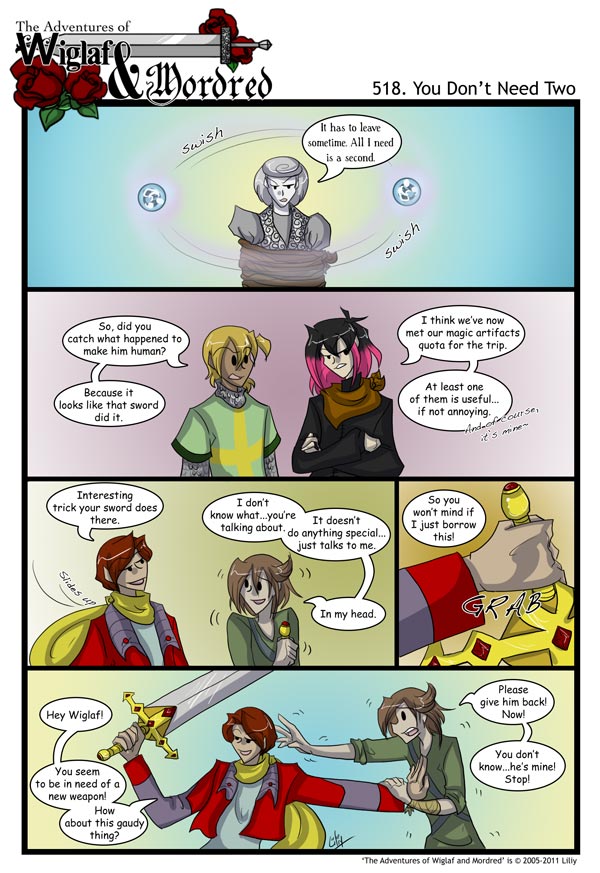 Mordred: If only summited your loyalty to me, I wouldn’t restrained you.

Wiglaf: Now how are we going to change him into a sword?

Azarel:Benjamin, I need to borrow that sword of yours

Benjamin: give it back!

Azarael: I wonder if affects all objects?

Azzie, you live with three women, you really do not want that sword, at all.

Panel 1:
Bliss says, “La, la, la, that’ll hold you.”
Camlann rants, “Several millennia, and you are unquestionably the worst master I have ever had! No one DARES to punch the Defender of the Gates of Breton March and Killer of Ferracutus, the Uniting Force of Bradamante and the Descendant of Astyanax, the Dream-Merlin of Queen Eleanor, the Witness of the New Moon of Sir Patrick Spens–”
Bliss says, “Master! Look what I’ve done!”
Camlann continues, “–to which you hold no candle, you foul, glassy sphere. Stop orbiting.”

Panel 2:
Wiglaf notes, “Camlann is human, now, and he still doesn’t breathe.”
Mordred responds, “You can’t have my scarf as a gag.”
Wiglaf says, “What are we going to do with him?”
Mordred, growing tired of the subject, says, “That would be your problem.”

Panel 4:
Azrael grabs Eclat, saying, “Fine. I will kill him.”

Panel 5:
Ben exclaims, “Wait! You d-don’t know what you’re doing!”
Azrael replies, “I like to learn by experience.”

…..Liliy, you have GOT to do this more often. XD It’s fun to write speculative dialog for a TAWM page. Perhaps it could be another annual competition, with acclaim for the funniest, or the closest to intent, or something.

Agreed. This one is pretty awesome. Especially “learning by experience.”

I have but one line to add for panel #1 and #2 respectively.

Camlann: You’re giving me a headache!!

Mordred: And YOU!! Put a shirt on already!!!

One of these days, you should have a fill-in-the-dialogue/color contest.

Bliss: “This is the song that never ends~ It just goes on and on my friend! Some people started singing it-”

Cam: “… Once I am free of this I now have one more reason to kill you.”

Wiglaf: “How is this my fault? You’re the one who wanted to get the sword in the first place.”

Mordred: “It is your fault until I find a more suitable victim to pin it on. Preferably someone vulnerable to torture.”

Azzy: “So, now that this is all over, we should go out for icecream.”

Ben: “No! Fine I’ll go for icecream! I’LL GO FOR ICECREAM! Just give him back.”

your suggestion has merit :P I love your take on what everyone would say :D :lol2:

Bliss: “Yay! Ring around the rosie, a pocketful of posies…”

Camlann: “You insolent humans shall pay dearly for daring to dishonor the mighty Sword of Camlann in such a vulgar manner!”

Wiglaf: “Is there any way we can that orb to shut his mouth for good?”

Mordred: “You figure it out. I’ve done my part. And I did it only for my image, not for you.”

Azrael: “You know, Ben, that sword of yours can sure do some nifty things.”

Azrael: “As a matter of fact…” (seizes sword) …”I think I’ll find out what it can do in the hands of a true fencing master!”

Correction: Add “get” to Wiglaf’s line–”any way we can get that orb to…”

Nice idea, Liliy. We should do this again in the future.

Camlann: How dare you insolent humans treat me this way! Me, Camlann. I deserve better than this! Oh when I get out of here…(you get the idea) (in smaller text off to the side, ‘And where did they get the rope anyways?’)

Mordred: Lackey, find a way to make him stop. And you, put your shirt back on already!

Panel 3.
Azræl: Now I’m even more interested in that sword of yours. May I see it?

Panel 4.
Azræl: You don’t even look like you know how to use a sword. *takes sword* I’m just making your life easier.

Panel 5.
Azræl: Lets see what this does in the hands of a real swordsman hmm?

this world is black and white, but for Bliss

Panel 2:
Wiglaf: Why didn’t you do that sooner?!?
Mordred: Oh, so it’s my fault? I seem to recall something about neglecting and abusing your sword, hmmm, Lackey?

Panel 5:
Azrael: Yes, I think this will do quite nicely.
Ben: Hey! Give that back!
Azrael: Oh, don’t worry. I just need to do one small thing.

To make the next fight more interesting?

Or to avoid getting punched with the kind of force Wiglaf accidentally used last time they fought near Bliss.

Either one works, but I’m thinking it’s the second one

Panel one is surprisingly free of text-wall XD

…Though Eclat would complement Wiglaf’s hair.

Just wondering…would Azrael be able to see Eclat when he holds the sword? And…I don’t think that Wiglaf would take it. Magic swords are too much trouble. As we can see, the only magic items of use are the pendant and Bliss…sort of…

Only if Ben gave the sword to him/sold it to him. If he simply takes it it doesn’t not belong to him, so it hasn’t technically transferred owners, therefore Azzie cannot see Éclat.

Gaudy! For shame, Azrael! Eclat is not pleased.