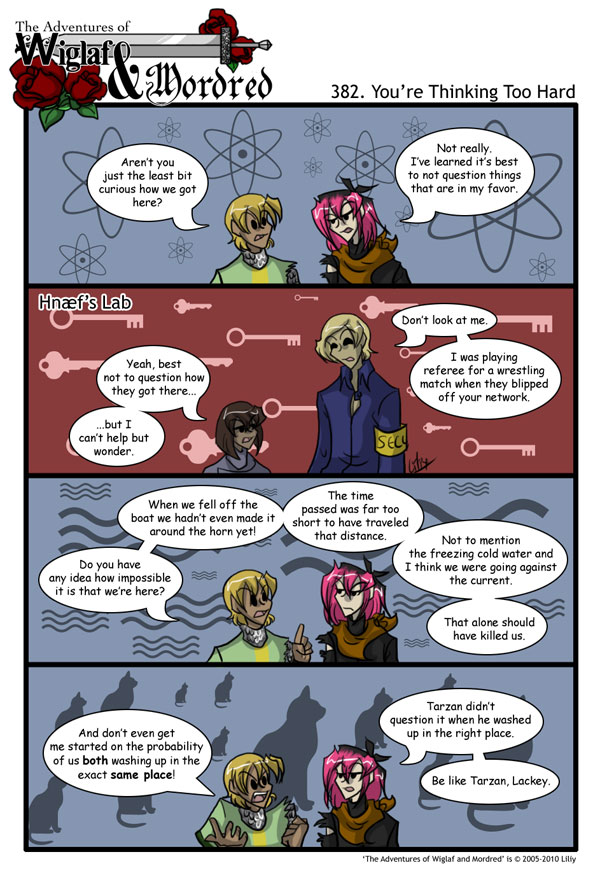 Is this post what you’d call Lampshade hanging? Possibly.

Yes Security was workin’ the wrestling match Sváfa was watching. I think. The point is – he didn’t do it. And that’s his story and he’s sticking to it. In other WaM news – Ruby Red has a cast page. :D

In other news – War For Cybertron comes out this week. We’ll see how that effects WaM’s schedule…Glee.

Oh! WaM’s doing it’s usual guinea pig update for Webcomic & so there’s some stuff out of place. I know the Archive page in particular took a hit. XD So stuff might be out of order…working on fixing that! And a new layout is coming out soon too. So be on the look out for that. Much cleaner~ (Still mostly the same – I’m mostly moving the menu & changing the header to something a bit more time appropriate.)

In more fun news – we’ve had another fun random WaM sighting! (If you link to wam using liliy.net/wam I can usually find it in my referrals. :D)

They be puppies! Shida has them as pets! Found them in her post here but here’s a pic of them! Aren’t they cute? If this isn’t a perfect setup for a huge fourth-wall break I don’t know what it is. Love the random backgrounds. XD And hurray for the puppies; they are awfully cute.

Yup, cuteness personified! :happy: But I keep thinking the Mordred should have pink tints in his neck fur… :lol:

This is the story I got from the background:
Science is the key to unlocking the secret of making bacon out of cats.
This either stems from a love of bacon or a hatred of cats.
Also, I love watching Wiglaf getting so upset over this :P

First time commentor! Just wanted to say I love your comic! I find it hilarious ^ ^…and I really just wanted to point out the fact you spelled “question” wrong in the second panel…

Hmmm, You know I actually have characters that may be able to explain this.

Well someone needs to switch to decaf.

May the MST3K Mantra be with you, Lackey.

A whale. That’s it! Right after being punched by the polar bear, they totally got swallowed by a whale, the whale swam to Peru, they got blown out of the blow hole and drifted onto the beach.

Love th backgrounds, by the way. :)

“surrounded by his records, CD’s and the” I don’t think you’re talking about something that belongs to the CDs so unless I’m mistaken you probably shouldn’t have that apostrophe there.
Oh, and careful you don’t break the 4th wall too hard–when the characters start doing genre-aware meta-plotting themselves you’ve probably gone way too far.

It took me a minute to realize you were talking about Ruby’s cast page for that CD comment. I changed it to “compact discs” because writing “CDs” hurts me. I don’t know why but it’s always bugged me. *is why sticks in that apostrophe without thinking*

…you can never go too far.

CD is an acronym and acronyms are horribly overused and outright abused by corporate buzzword-speak and bureaucratic language distortion. In light of that fact I’d say it’s a very healthy instinct to distrust most acronyms on sight.

Regarding the other point, I tested out this brownie recipe (substituting a 2/1 ratio of canola/rapeseed oil and semi-sweet chocolate chips for the butter in the recipe) for Father’s Day and the results met with praise and approval: http://baking.about.com/od/brownies/r/ultimate.htm
Perhaps you should try the recipe except changing the cooking time–turn up the heat to 450 Fahrenheit and try to cook the brownie for five hours instead of the listed 375 for thirty-five to forty minutes. Since you can never go too far, right?

Probably healthier for you anyway. Gets rid of the temptation of delicious brownies. :D

Good response, but I was trying to be less rude than making a proposal to walk in the wrong direction off the roof of a tall building. The fact is there are lots of things that can be overdone–like obsessively playing a video game without enough breaks to eat and sleep for days. At least the poor people who had to deal with that guy’s corpse would tend to think so about that one.
Regarding the actual point about going too far into meta-fiction, I’d suggest reading Tailsteak’s 1/0 webcomic (completed) which was all about genre and 4th-wall treatment exploration. If going into meta-fiction is something that interests you it could be informative and entertaining for you as well. Perhaps reading it may give you pointers on what specifically might be going too far with Wiglaf and Mordred.

Might be worth it depending on the game…. :D

I kid. But really, if it makes you feel better today’s strip isn’t so much metafiction as just something unexplained for the moment. (That and I promised my father a Tarzan reference.) I don’t really have any plans of breaking the fourth wall anytime soon (save for one slip with Security way back when~)

Alright, alright, sorry for overemphasizing a point you likely had a fully-adequate understanding of before I first put finger to keyboard to warn you about it. I am suspicious of manga/anime plot conventions on general principles and this hybrid beast still puzzles me.

Psh; nothing to be sorry about. Your conversations/comments are always fun to read~

And Puzzling can be good though~ You’re still reading. :D Though it might have something to do with the fact I’m a rather big fan of animation in general be it Western or Eastern & try to draw from both. XD

Liliy, stop torturing your cast. Creative cruelty is a terrible thing when you’re a god amongst your creations.
On another note, going on an archive binge has convinced me.
Mordred is actually much smarter and more devious then most people give him credit for, and the only reason he’s the Garrott family failure is because of a lack of motivation on his part. :happy:

Concidering what Arthur and Janus are like now, and imagining how they would react if Mordred was successful I can understand a lack of motivation.

I love the back grounds.

Oh yeah, of course security didn’t have anything to do with it. Of course.