The second to last issue of the Hawk & Dove series (insert sobbing here), and another solo for Rob Liefeld writing & drawing. Also worth noting is the new colorist Andrew James Troy.

As for the usual little previews for this issue–you only get one: 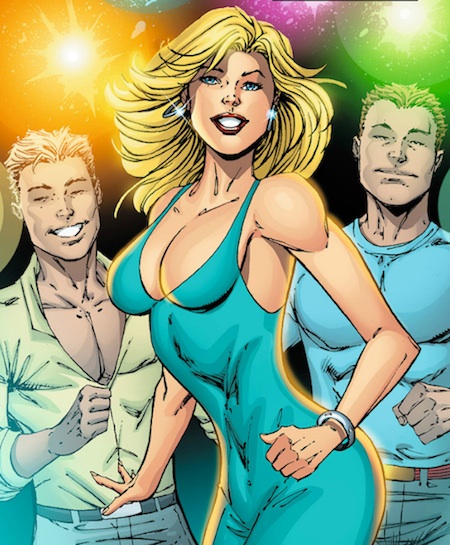 This is the only frame that matters.

And now that I’m finished drooling over Dawn from Page 1…let’s continue!

Dawn’s gone crazy after the old break up with Deadman and starts partying it up at the local club scenes. Hank gets dragged along to be her wingman (Ha ha. I love puns, you don’t understand how much I do.) but more ends up her bodyguard when the guys get too fresh. He can’t take watching her like this anymore and drags Dawn out into the alley for a one-on-one intervention.

They argue & have a cute little makeup session before…BAM! Interrupted by our new baddie: The Hunter. He’s out for our Bird-Themed heroes and thus ensues a great fight scene. The Hunter takes a couple souvenirs from our main duo (you have to read it…the one he takes from Hawk is particularly amusing) and the fight is held up by the appearance of newcomer Xyra, and the Hunter leaves.

Turns out there’s a cult that worships hawks and that means Hank, our favorite Hawk, is on their ‘false god’ list. Hank & Dawn team up with Xyra for more information and Hunter retreats to the real big bad who has a bit of a prediction of things to come.

Okay, this was the first issue where the art was weak in places. There may have been a cross eyed look here or there and some panels where the coloring seemed a little off with the inking. While most of the book looked great, it was just these few spots that looked slapped together.

I can’t blame them too much, with so many other projects it’d make sense that the canceled series gets the least attention or could hurt motivation. Overall though, these are minor complaints and Liefeld’s art style still holds true and the new colorist did a good job trying to keep the style familiar to previous issues. And hey! We got the pic of Dawn above. That makes up for anything else in the issue. XD (Xyra’s not too bad herself in sweats, either.)

Good issue and I like where the story is going. I look forward to the last issue and I hope Hawk & Dove gets to go out with a real hitter. Definitely pick this one up if you can. It’s got some good stuff from Dawn & Hank bonding and seeing the stress in their relationship.

Hawk & Dove is still my favorite series of the New DC 52 and I can’t wait for this duo to show up in other titles. :3