It’s that time again! My Convention report! No pictures today ’cause…honestly I didn’t buy any figures this year, and that’s really the only reason I take pictures to show off. So…reading you shall!

I got to the convention on time this year. XD I only had an hour delay! Go me!

As soon as I got there, we stood in line and registered (The Pre-Reg line was longer than the normal registration when we got there, which is sort of funny, but true…). Followed quickly by a trip to the dealer’s room. A friend showed up while we were there, so we ditched and helped her unpack.

From there, it was the AMV competition! Two of the videos had technical difficulties, which sucked, but overall it was a good show with a lot of great entries. Though one of the filler, pre-show entries: Gaga For Bishies, made me laugh the most.

After AMV’s we went back to the room and crashed watching some Tron: Uprising. Bold because you should watch it. WATCH IT.

Friday night ended with a trip to the VIP Club on the 18 & 19th floors of the Gaylord Hotel…and then bed.

We finally hit the Artist’s Alley, where I got some awesome Tsuritama fanart. And you know how much I love Tsuritama. Then it was the Dealer’s room, where I actually behaved myself this year and only bought the Dark Souls Design Works art book, and a grab bag that I ended up giving the contents away to one of my roomies.

Oh! I got a plushie of Wheatley. That probably deserves a pic: 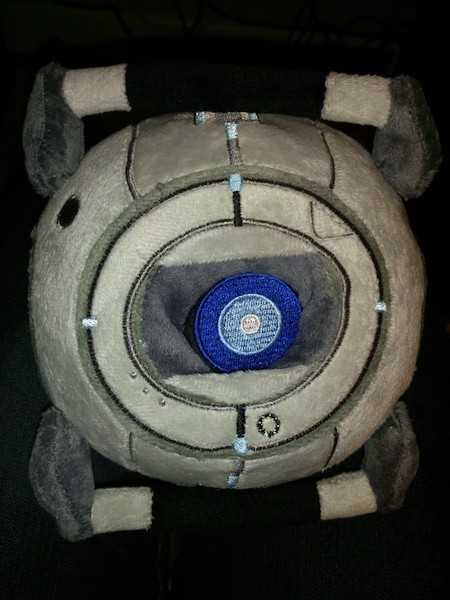 Ain’t he cute? Yeah. He is. Let’s see. After Dealer’s Room, we hit Artist Alley & Ran into some fine folks at Tamuran and Snow by Night. I saw the TechnoAngel Crew’s booth, but didn’t say hi. xD But I saw them!

After that we tried to watch AMV Hell, but due to technological difficulties, we crashed the A Certain Scientific Railgun Video Room instead. Cute show. Might have to check out more later.

Then it was Dinner at the restaurant across from the hotel, and we returned in time for one more trip around Dealer’s and Artist Alley before heading to the showing of Hellsing: Ultimate Abridged. Funny stuff. (We also caught the end of an episode of Blood C. Violent stuff. XD)

Apparently a fire alarm went off early in the morning, but we all thought it was someone’s alarm clock and ignored it. When the ‘all clear’ went off an hour or so later, we…realized we’d slept through something. Oops.

Got all our crap in the car, and went one more time around Dealer’s & Artist’s Alley. Though this time, I stopped being blind and actually noticed Naki’s booth. XD I’ve been talking to her online for like 12 years, so it was really cool to put a face to her name and artwork. :D

I also got a Braeburn keychain from her. <3

We ended our con trip by attending the Symphonic Anime Orchestra performance. Good stuff for a group that was pretty much sight reading. XD Nice selection & a great end. :3